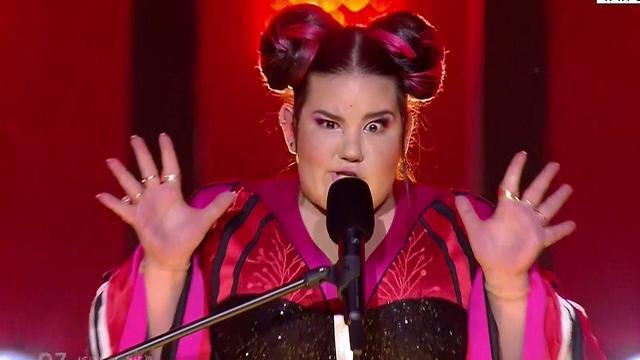 Netta Barzilai, chosen to represent Israel in the Eurovision song contest, performed the song "Toy" Tuesday, and was voted to be one of the ten singers to reach the competition's final—to be held Saturday night.

18 singers representing various European countries did not make the cut.

"I'm proud and excited to have made it to the finals, I eagerly await Saturday and promise to do whatever I can to bring next year's Eurovision to Israel," the crooner swore.

After the announcement about her finals berth, Netta stumbled and fell down the stairs, but thanks to her quick reflexes she was not hurt.

Barzilai was the seventh in line to perform. She went onstage escorted by backing singers and statues of Chinese cats, drove the crowd wild and drew thunderous applause.

Netta and her team

She finished her performance by saying, "Thank you so much, Europe."

After going offstage, masses of people in the standing zone came over to greet her.

After Barzilai's performance, there was another drop in the Israeli song's ranking on some betting agencies. She is now ranked fourth on some agencies' listings, while in others she is still ranked in second place.

The Israeli crooner leaving the stage

The second semi-finals will be held on Thursday and on Saturday, the 26 countries reaching the finals will compete against one another for the crown.

The Israeli representative and her song "Toy" drew a lot of attention from the get-go, and according to early predictions, Netta was expected to reach the final. "We'll definitely reach the finals, don't you worry," said Doron Medalie, who wrote Netta's song and accompanied the Israeli delegation to Lisbon.

In an interview with Ynet, Medalie spoke about the pressures facing the young singer, who is considered a leading candidate for victory. "The Eurovision Song Contest can be very stressful and hectic, but if one knows to disconnect from it all and just enjoy it and focus on the real thing, the pressure goes down," he said.

"And Netta is very much like that. She's inside her own bubble. We have such a fun song, and when one performs it, it's just a blast," Medalie added.

Netta's family also came to cheer her on and wore creative T-shirts with Netta's image on it saying, "Yes chi-ken"—inspired by former US president Barack Obama's "Yes we can" campaign ahead of the 2008 presidential elections.