Ivanka Trump arrives in Israel ahead of US Embassy opening

The US president's daughter and her husband Jared Kushner head delegation of dignitaries from Washington to the US Embassy inauguration ceremony in Jerusalem; 'With great joy, I am returning to Jerusalem,' Ivanka writes on Instagram ahead of visit.

Ivanka Trump, the US president's daughter, and her husband Jared landed at Ben-Gurion Airport on Sunday ahead of the opening ceremony for the American embassy in Jerusalem on Monday.

Trump is leading the American delegation to the ceremony alongside US Secretary of the Treasury Steven Mnuchin.

"With great joy, I am returning to Jerusalem," Ivanka wrote on her Instagram page on Saturday.

"I am honored to join the distinguished delegation representing President Trump, his Administration, and the American people at this momentous ceremony commemorating the opening of our new US Embassy in Jerusalem, Israel," she added.

"We look forward to celebrating Israel’s 70th anniversary and the bright future ahead. We will pray for the boundless potential of the future of the US-Israel alliance, and we will pray for peace," Ivanka concluded. 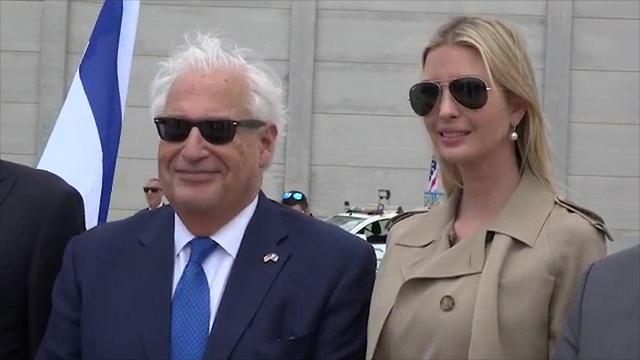 The US State Department stressed on Saturday that "Moving our Embassy is not a departure from our strong commitment to facilitate a lasting peace deal; rather it is a necessary condition for it. We are not taking a position on final status issues, including the specific boundaries of Israeli sovereignty in Jerusalem, nor on the resolution of contested borders.

"Consulate General Jerusalem will continue to operate as an independent mission with an unchanged mandate responsible for US relations with the Palestinians and the Palestinian Authority. The United States continues to support the status quo with regard to the Haram al-Sharif/Temple Mount. The Administration is firmly committed to pursuing a lasting and comprehensive peace between Israel and the Palestinians that promises a brighter future for both."

Prime Minister Netanyahu will host a gala reception for the American delegation on Sunday afternoon.

Among the 800 invited are 86 foreign diplomats. While most of the European ambassadors have decided to boycott the event, ambassadors from Hungary, the Czech Republic, Romania and Austria will be among the 40 ambassadors attending. The Bulgarian ambassador might attend as well.

The Foreign Ministry has decided to allow all Knesset members to attend the reception, after being criticized for only inviting members of the coalition and members of the Knesset’s Foreign Affairs and Defense Committee.

“We misestimated the demand,” said a Foreign Ministry official. “As soon as we realized that there was a lot of interest in the event, we decided to open it to everyone.”

The official embassy opening ceremony will kick off at 4 pm Monday with about 800 participants. It will begin with the American anthem and opening remarks from Ambassador Friedman, who will invite a priest and a rabbi to offer their blessings. The ceremony will include speeches by Netanyahu, Mnuchin and Sullivan, followed by a televised greeting from President Trump. Singer Aveva Dese and her band will perform the songs “Jerusalem of Gold” and “Jerusalem.”

The embassy’s official sign with a dedication plaque for President Trump and Vice President Pence will be unveiled, followed by speeches from President Reuven Rivlin and Kushner.

The embassy’s mezuzah will be affixed by Ambassador Friedman on Wednesday.

At the same time, the Israeli Embassy in Washington will host a special event in honor of the embassy move and Israel’s 70th anniversary. The guest of honor will be Vice President Pence, who will also speak at the event.

Trump boasted recently that he had saved the American taxpayer a lot of money by instructing the ambassador to open the new embassy in an existing building which would be renovated and adjusted, instead of building a new structure for $1 billion. The embassy opening is expected to cost about $400,000 in renovation and security expenses. In the first stage, the Jerusalem embassy will accommodate Ambassador Friedman and a small team of diplomats while the search continues for a proper location for a permanent embassy building.

Meanwhile, senior Republican Party officials are competing over who will praise the president more for the embassy move. Trump sees the move as a significant diplomatic success, being the first president who kept his promise to relocate the embassy. His political base applauded the decision, particularly the Evangelicals who have been pushing for this move for a long time. The president, who had planned to attend the ceremony himself, was forced to skip the event due to a tight schedule but has filmed a video message for the attendees.

Administration sources estimated in recent days that after the embassy opening, the US would present its peace plan for the Middle East, which would include a certain compensation to the Palestinians following the outcry over the move and over the official American recognition of Jerusalem as Israel’s capital.

Administration officials have stressed, however, that the president has yet to decide when to present the plan. According to the sources, before addressing the Middle East’s problems he will likely work to establish his position in the international arena after his planned meeting with North Korean leader Kim Jong-un in Singapore on June 12.

The feeling among Trump’s associates is that the president has finally found his diplomatic voice. In the coming months, he plans to carry out a number of global moves to compensate for the expected rift between the US and European countries over his decision to walk away from the nuclear agreement.

Some 150 left-wing protestors marched in Jerusalem on Saturday evening against the Jerusalem Day flag procession and the US embassy move. The protestors called on the government to stop inflaming the situation on the ground, spreading hatred and undermining any chance for peace by initiating provocative moves.

Meanwhile, police have allowed the Peace Now movement to place a sign near the embassy building in Jerusalem reading, “Two embassies in Jerusalem—an Israeli interest.”