Preparations for US Embassy inauguration in Jerusalem
Photo: Idan Arbeli 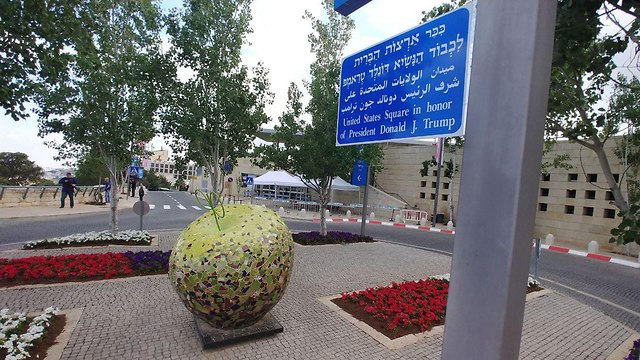 Israel has only one capital

Op-ed: Tel Aviv Mayor Ron Huldai congratulates his city's older sister on its moral victory ahead of inauguration of new US Embassy, says expects all embassies to move to their natural place—Jerusalem.

"Next year in Jerusalem" is a sentence every foreign ambassador, whose embassy is located in Tel Aviv-Jaffa, hears from me upon arriving for an introductory meeting.

In all my years as mayor, I have made it clear to every distinguished ambassador that we will provide him and his team with the best service to make them feel at home here, but that I am first and foremost an Israeli who is offended by the fact that his country refuses to recognize my country's capital—Jerusalem—as Israel's capital city.

What would the Italians say if the State of Israel decided that Milan rather than Rome was the capital of the boot-shaped country and placed its embassy there?

Tel Aviv-Jaffa is proud of the growing recognition it has been receiving in the international arena as a global city—a city whose importance as an economic, cultural, scientific and tourist center goes way beyond its country's borders and is often mentioned in the same breath as the world's leading cities. But the first Hebrew city knows it will always be second to Jerusalem—the Jewish people's eternal capital.

Tel Aviv can be called Israel's economic capital, high-tech capital or cultural capital, but it will never be THE capital, because there is only one capital city in Israel—Jerusalem. This is the reason our city sees accommodation of foreign embassies as a temporary mission, until all embassies move to their natural place—Jerusalem.

As an Israeli, a Jew and a Zionist, Jerusalem is always in my heart. I can’t forget how I burst with excitement at the end of the Six-Day War, in which I fought as a combat pilot, when I heard the song "Jerusalem of Gold" in the cockpit radio and realized that the city had been liberated.

Today, I applaud the US president's decision to move the US embassy to Jerusalem. I welcome the decision and I'm happy about it. Like David Ben-Gurion, I too feel that "if a land has a soul, Jerusalem is the Land of Israel's soul" and Jerusalem is "the core of the land."

Tel Aviv and Jerusalem are often presented as two different worlds. There is a difference, but it's the difference between two of the many complementary faces of modern Israel, which is a combination of matter and spirit, past and present, roots and pluralism.

Tel Aviv is 109 years old, Jerusalem is 4,000 years old, and they are both Israel of 2018. Young Tel Aviv is happy for its older sister's celebration of the US Embassy inauguration and congratulates Jerusalem on its moral victory, which may have taken some time to arrive—but eventually did.

P.S. And the Eurovision too—next year in Jerusalem!