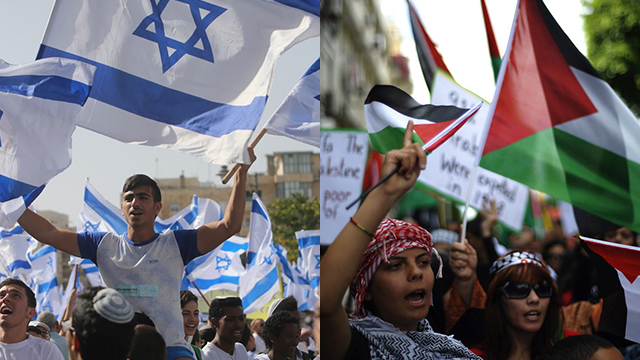 More than a quarter of a million people have been counted in both Israeli and Palestinian census, bringing into sharp focus need for clarity on already sensitive demographics issue; Israeli statistics bureau counts 332,000 Arabs as Jerusalem residents, while Palestinian bureau counts 265,000 in Israeli-annexed east Jerusalem, meaning they were counted twice.

More than 250,000 east Jerusalem Arabs have been counted twice in Israel's demographic statistics and in their Palestinian counterpart, it was revealed Monday.

Several weeks ago, a public row broke out on the backdrop of demographic fluctuations between Jews and Arabs in Israel and the Palestinian Authority.

Deputy Head of the Israeli Civil Administration Col. Uri Mendes said late March during a meeting of the Knesset's Foreign Affairs and Defense Committee that five million Palestinians reside in Gaza and the West Bank. The Israeli Civil Administration's data is mainly predicated on information provided by the Palestinian Central Bureau of Statistics, which is considered a reliable source.

The revelation caused an uproar in Israeli, with the Right claiming it was not accurate, and the Left warning against the danger of annexation.

However, a review of the data provided by Israel's own Central Bureau of Statistics (CBS) showed the number of Arabs who are Jerusalem residents—since most of them reside in east Jerusalem—is 332,000.

A few days later, the Palestinian CBS published its census report, showing that 4.78 million Palestinians reside in the West Bank, the Gaza Strip and east Jerusalem combined, while 435,000 of them resided in east Jerusalem alone.

The Palestinians divide this data between territory J1—the part annexed to Israel in 1967—and J2—the territory not annexed as well as the Shuafat refugee camp and neighborhoods outside the separation fence, all of which are defined by Palestinians as belonging to east Jerusalem.

According to the Palestinian Central Bureau of Statistics data, 265,000 people reside in the J1 territories, which indicates that more than a quarter of a million people have been counted twice by the Israeli as well as the Palestinian CBS.

The demographic-political issue is sensitive enough as it is, and becomes even more significant consider such a large number of people has been counted in both sides' numbers.