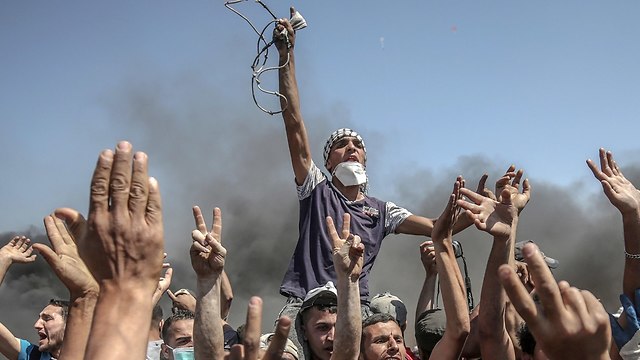 Op-ed: Palestine’s Arabs went through an expulsion, just like tens of millions around the world, including Jews. But the Palestinians are the only ones who adopted an ethos of rejectionism, self-victimization, suffering and death. For 70 years now, the Nakba isn’t just a memory. It’s the ethos, the identity, the lifetime achievement.

Every Palestinian death is a pity, including those who were killed on Monday. Those were unnecessary deaths, part of the Nakba culture the Palestinians have been adopting for 70 years now.

There was a Nakba. Palestine’s Arabs underwent an expulsion. Tens of millions around the world, including Jews, went through a similar expulsion. But the Palestinians are the only ones who have adopted an ethos of rejectionism, self-victimization, suffering and death. They aren’t looking for their own good. They have become addicted to a Nakba which is fully self-made, from its inception to this very day.

Monday’s dead are the product of payments from Iran, an addiction to the self-victimization and self-deception ethos, and the fostering of the return fantasy (Photo: EPA)

Monday’s protest was dedicated to Jerusalem. That’s interesting. Since the occupation in the year 638, Jerusalem was—most of the time—under Muslim rule. They never built a capital there. They never celebrated the city. Nothing.

It didn’t start on Monday. Musa Alami was one of the most important leaders of the Arabs of Palestine under the British Mandate. He studied in Britain, was a senior commander in the British Mandate, held talks with David Ben-Gurion, was close to the Nazi Haj Amin al-Husseini and was a member of the Arab Higher Committee. Like all other members of the leadership, Alami was against the Partition Plan. He invited the Jordanian army to invade Israel to thwart the existence of a Jewish state. When the Arab plot failed and the refugee problem was created, Alami called on the Arab world to start preparations for a war on the 'Jewish entity.'

Alami, who came from a rich aristocratic family, also tried to build an agricultural farm near Jericho to help the desperate refugees somehow. King Abdullah allotted about 5,000 acres for the project. Alami began digging and was joined by several people. They found wells.

Monday's unnecessary deaths are part of the Nakba culture the Palestinians have been adopting for 70 years now (Photo: MCT)

Alami raised funds and the initiative began taking shape. Refugees found work and a livelihood, and the agricultural crops fed the hungry. The farm began thriving. On the premises, they built a swimming pool, a clinic, a school and accommodation for hundreds of orphans who found refuge from their distress. It was meant to be a wonderful rehabilitation model, in accordance with the international community’s mandate and the mission the United Nations Relief and Works Agency for Palestine Refugees in the Near East (UNRWA) was assigned with.

The thriving farm infuriated the refugees’ public activists and the leaders of the Arab world, apart from Abdullah. Despite Alami’s radical views, they launched a propaganda campaign against him, turning him into a traitor who cooperates with Zionist. Rehabilitating refugees was perceived, even back then, as treason.

In the end of 1955, following ongoing incitement, hundreds of rioters invaded Alami’s farm, leaving it in ruins. The arrival of Jordanian policemen prevented murder and rape. If we want to understand why the Palestinian refugees’ descendants have remained in a state of distress, and why Hamas rioters vandalized the strip’s gas supply pipes, and why the Arab world hasn’t bothered to rehabilitate for 70 years now, and why the Palestinians failed to establish a state and had no concern for Jerusalem, we should go back to the Alami farm rioters. It’s the same logic. For 70 years now, the Nakba isn’t just a memory. The Nakba is the ethos. It’s the identity. It’s the lifetime achievement.

While the free world is ‘condemning both sides,’ the Palestinians are paying the price (Photo: AFP)
The Alami story, as part of the refugee saga, appears in Adi Schwartz and Einat Wilf’s new book “The Right of Return War,” which is being published these days. The book is an indictment, not just against the international community, not just against Arab states, but against Israel as well. Because all of them together have made it possible for the monster known as the refugee problem o reach shocking dimensions. In the exact same years that Alami’s farm was active, from 1951 to 1955, $200 million (the equivalent of nearly $2 billion those days) were allotted for refugee development and rehabilitation projects. Only $7 million were used—3.5 percent. They weren’t interested in rehabilitation. UNRWA, which was created to solve the refugee problem, has turned into an agency for the perpetuation of refugeeism. Monday’s dead are the product of payments from Iran, an addiction to the self-victimization and self-deception ethos, and the fostering of the return fantasy, by UNRWA as well. The bloodshed and the suffering can be stopped. The free world should make it clear to the Palestinians: Peace, welfare and prosperity will arrive when you stop dreaming about ruin, destruction and return. But the free world is “condemning both sides,” encouraged by part of the Left. And the Palestinians are paying the price.