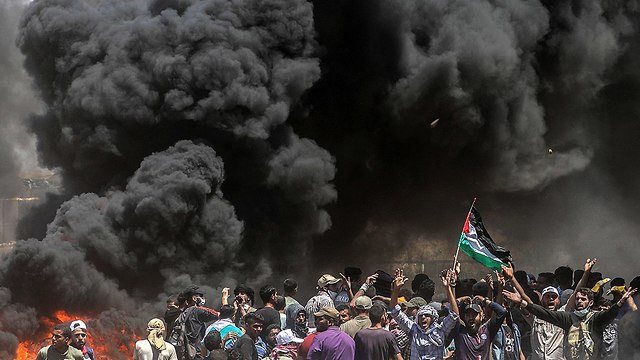 The Gaza battle isn’t over yet

Analysis: Monday’s events left the Gazan street in a state of shock. As the bodies piled up and the hospitals collapsed, the leadership was forced to stop and think. Now, everyone is waiting: Will Hamas resume the violence in the coming days and on the weekend, or will it try to utilize the ease of restrictions offered by Egypt and Israel?

The Gazan street was in a state of shock Tuesday, on Nakba Day of all days. The resistance movements—Hamas and the Islamic Jihad in Gaza, alongside Fatah in the West Bank—were supposed to demonstrate their full force on the street that day, but things didn’t go as planned.

Several hundred Palestinians in the Gaza Strip, mainly in the Al-Bureij area, flocked to the fences and run wild as a force of habit. The result was one dead Palestinian and 50 wounded. Considering the weekend protests of the past two months, it was almost a regular day.

In the West Bank, some 1,000 protestors gathered in 18 sites. Despite the forecasts, it ended up being the calmest Nakba Day Israel could have wished for.

Monday's riots. The death toll left the Gazan street in a state of shock (Photo: EPA)

There isn’t a single PR genius capable of explaining to normative people in the world a death toll of 61 and 2,850 wounded Palestinians in one day of protests. Israel will pay for Monday’s events. In the short run, these numbers created a shock in Gaza. Hamas leader Yahya Sinwar may have encouraged young Gazans to smash into the fences, but as the bodies piled up and the hospitals collapsed—it made the leadership stop and think.

The social media discourse reveals a dispute: Part of the Hamas leadership is demanding revenge and wants to keep pushing the street to the fences so as not to lose the momentum; another part wishes to examine the political-economic achievements Hamas might be able to score from Monday’s victims.

It’s quite possible that the clashes will resume. On Tuesday evening, reports began arriving about buses ordered to drive the masses to the fences. The IDF remains on high alert.

Dr. Sufian Abu Zaida, a former minister of prisoner affairs in the Palestinian Authority who lives in Gaza, published a desperation op-ed on Tuesday, titled “Gaza, where are you headed?” According to Abu Zaida, if the popular struggle on the fence continues, Israel will find itself in an ongoing state of emergency, and the battle will spill into the strip and lead to the development of an “open war” (with no time limits), in which the common people will pay the price. He recommends converting Monday’s tactical achievement into a strategic achievement: In light of the victims, the PA will halt its sanctions and the siege will be lifted.

In the internal discourse between Gaza’s different political streams—Fatah, the Popular Front, Hamas—activists are also talking about their shock, about needing time to recover, about recalculating their route. Most importantly, they are talking angrily and contemptibly about the PA, which they see as an Israel collaborator. They are referring to the West Bank residents as treacherous. Abbas did declare three days of mourning, but it’s business as usual on the West Bank streets.

Ismail Haniyeh. Hamas had to be hit hard enough to make it stop and think (Photo: Getty Images)

Israel and Egypt are managing the crisis in a transparent manner. The Egyptians are playing “good cop” and Israel is playing “bad cop.” On Sunday, when Hamas leader Ismail Haniyeh was summoned to Cairo, he heard an explicit threat from the Egyptian intelligence chief, General Abbas Kamel. He was told that Israel was planning a military strike inside Gaza, which would also target the Hamas leadership.

The Egyptian asked the Hamas people to stay away from the fence so as not to play into Israel’s hands. Instead, he offered them a respectable economic package in the form of electricity and a more generous opening—at least once a week—of the Rafah Crossing. He also suggested that the Egyptians would supply the fuel and the gravel that have been transferred so far through the Kerem Shalom Crossing. The next day, Egypt even offered medical aid to Gaza’s wounded.

The Egyptians are interested in a calm, as they fear Hamas and the global jihad will renew their ties. Moreover, the Egyptians are now going to demand more serious Israeli cooperation with the Egyptian plan to hand the control over Gaza back to the PA. Israel, for its part, rushed to open the Kerem Shalom Crossing on Tuesday and let seven trucks cross into the strip with medical equipment, in a bid to minimize the international indictment being written against the state.

Hamas chose to ignore the Egyptian intelligence chief’s warning on Monday, and Israel—as expected—played its part as the “bad cop.” It’s been years since warplanes were seen striking in the strip in broad daylight.

The Egyptians estimated that if Monday’s events ended with a small number of casualties, the riots would continue on Tuesday. Hamas had to be hit hard enough to make it stop and think. Now, everyone is waiting: Will Hamas resume the violence in the coming days and on the weekend, or will it wait and try to utilize the ease of restrictions offered by Egypt and Israel? The battle isn’t over yet.