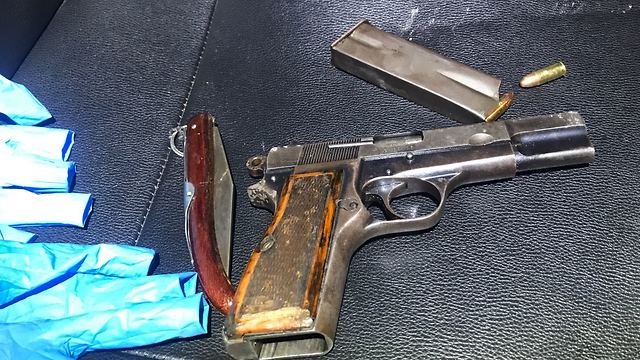 Palestinian opens fire on border cops near Jerusalem, is arrested

Border cops pursue terrorist in his 20s from Beit Sahour when he attempts to flee on foot after opening fire on them at checkpoint near Bethlehem; terrorist, who was lightly injured, was spotted by lookout soldiers and found to be carrying a knife, while handgun was also found near the scene.

Border Police soldiers arrested overnight Wednesday a Palestinian terrorist who opened fire on them near Jerusalem.

The terrorist was spotted by lookout soldiers, prompting a car chase that concluded with the soldiers crashing into a military vehicle. No one was injured among the security forces, but the terrorist was left in light condition.

(Photo: Border Police Spokesperson's Unit)
Close to 2:30am, the terrorist shot at a force manning a checkpoint near Al-Khader west of Bethlehem. He was spotted by the troops from the Nitzan Battalion who were stationed in the area. During the chase that ensued, the reinforced military vehicle was shot several times, with one bullet hitting the window of one of the passengers. After the security forces ran the terrorist over, he continued to attempt to flee the scene. However the security personnel fired rounds into the air and arrested him. After his arrest, the Israeli force carried out a body search during which they found a knife. An FN handgun was also found in the area, which the forces believe was likely used during the shooting attack.

(Photo: Border Police Spokesperson's Unit)
The terrorist, who was in his 20s from Beit Sahour, also near Bethlehem, was given medical treatment at the scene. “The swift pursuit by the fighters and the identification of the terrorist by the lookout brought the incident to an end without any injuries sustained among our forces and the terrorist was arrested,” a Border Police statement read. “The soldiers are prepared and deployed during all hours to thwart terror and to protect the security of Israeli citizens,” it added.