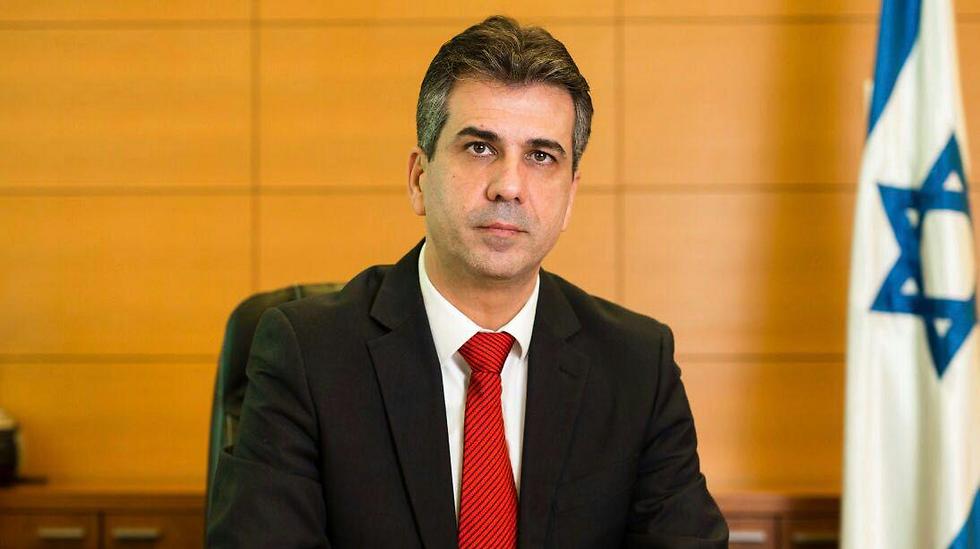 Israeli-Canadian woman interrupts remarks by Minister Eli Cohen at meeting with business people in Toronto, shouting 'We do not believe in murdering innocent people,' prompting him to respond in kind: 'Instead of building hospitals, instead of taking care of your people, you are shooting rockets!'

Supporters of the Boycott, Divestment and Sanctions (BDS) movement interrupted remarks by Economy Minister Eli Cohen during a meeting with business people in Toronto on Wednesday, prompting him to respond in kind by issuing his own criticism of Hamas’s actions in Gaza. One woman, who said she was a dual Israeli-Canadian citizen, came out against a trade agreement between Israel and her country, saying such a deal "was blood on the hands of Canadians."

When the protester mentioned that "Palestinians are calling for boycott, divestment and sanctions against Israel," she was answered with loud booing from the audience.

Nevertheless she persisted, shouting "We do not believe in murdering innocent people." Cohen raised his voice as well and said that Israel provides Palestinians with everything they need to have a stable and prosperous society in the Gaza Strip, but they choose to use the resources given to them for terrorism.

"Instead of building hospitals, instead of taking care of your people, you are shooting rockets!" he charged.

Economy Minister Eli Cohen (Photo: Dudi Vaknin)
"We send you medicine, we send you food," Cohen continued. "Build schools. Build industrial zones. This is what you should do with the money."

After the incident, Cohen commented on the BDS supporters' behavior, calling it provocation.

"BDS supporters work to create provocation out of desperation because of the drop in attention to them," he explained. "Everyone present at the event saw the warmth towards the State of Israel and the rejection of the delusional groups that support terror organizations in Gaza," the minister continued. Cohen stressed that "the advancement of Israel's international standing is evident in the signing of historic trade agreements, such as the one signed in Canada." Earlier, Cohen and Canada's International Trade Minister François-Philippe Champagne signed an updated trade agreement between the two nations, 20 years after the previous one. The agreement includes tax reductions on some 2,000 products and new additions that are included in current free trade agreements, such as provisions on electronic trade. Minister Cohen is leading a government delegation to Canada, which includes Innovation Authority Chairman Dr. Ami Appelbaum, the head of the Foreign Trade Administration Ohad Cohen, and the head of the Israel Export & International Cooperation Institute Adiv Baruch.

The initial free trade agreement between Israel and Canada was signed in 1997 and included tax reductions on all industrial products, but left out many food and agricultural products.

During the talks, Israel put an emphasis on increasing the benefits for Israeli exports in fields where some restrictions remain, alongside increasing imports as much as possible in an effort to lower the cost of living.

"The warm ties between Canada and Israel have historical roots. In 1997, Israel became the third country with whom Canada signed a free trade deal. Since then, Israel and Canada's trade has doubled, and in 2013 it crossed the $1 billion mark, which is still the case today," Cohen said. "The agreement signed today reflects, among other things, the ministry's policy of helping diversify exports and opening new markets to the Israeli industry."

At the end of their meeting, Cohen and Champagne set a goal to double the trade between the two countries within the next five years thanks to the upgraded agreement.