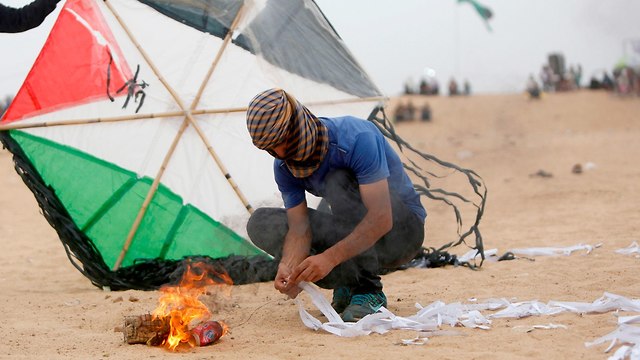 While mortar barrage from Gaza stop with attainment of ceasefire, incendiary kite terrorism never stopped, with 206 fires breaking out in region's forests and 4 square kilometer of wheat consumed by flames; 'It's exhausting and cases untold damages, we expect security forces to put an end to it,' says local civil security official.

A ceasefire was attained in Gaza, bringing a stop to the incessant barrage of mortar and rocket fire at Israeli communities on the strip's perimeter, but the persistent incendiary kite attacks have so far continued, with multiple fires breaking out Thursday in the Be'eri and Kissufim forests and near the Ein HaShlosha kibbutz.

In the latter incident, taking place at the southern region kibbutz, damage was caused to electrical infrastructures, whereas at the two forests dozens of acres of wood went up in flames.

Since the kite terrorism campaign began about two months ago—more or less coinciding with the broader March of Return campaign—206 fires broke out in the forests and woods on the Israeli side of the Gaza border alone.

File photo. Despite ceasefire, incendiary kite terrorism has continued (Photo: AFP)
The fire was eventually subdued and no one was harmed in any of the incidents, but Israeli communities around Gaza and local authorities cried out in anger at the fact that thousands of acres of wheat have been set ablaze for more than two months. More than 4,000 dunam (equal to 4 square kilometers) of wheat have been torched thus far, and thousands of dunam of natural woodland. Fire teams have been deployed in the region en masse, and are out in the field throughout the day. A civil security official from a Gaza border community explained that the IDF offered up special drones capable of intercepting the incendiary drones, but that in effect there has been no change, with new fires being set daily. 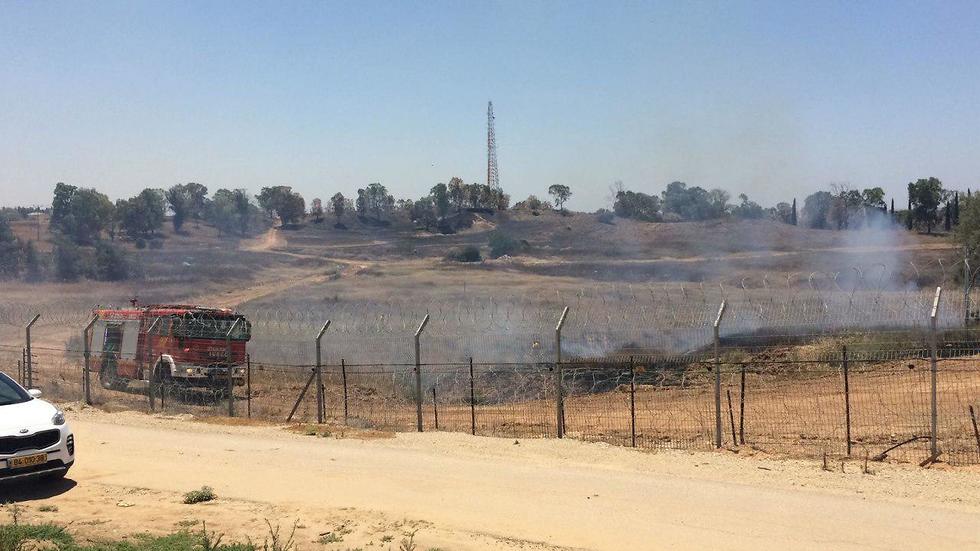 Firefighters putting out a fire started by an incendiary kite
"It's exhausting," he lamented, "and causes untold damage. We expect security forces to put an end to this phenomenon." Finance Minister Moshe Kahlon took a tour of western Negev communities some three weeks ago, and stated that "those who fly incendiary kites should be treated the same as those who launch rockets." During the visit, on which he was accompanied by a representative of property tax, the treasury minister vowed that farmers will receive remuneration for the damages caused to their wheat fields. 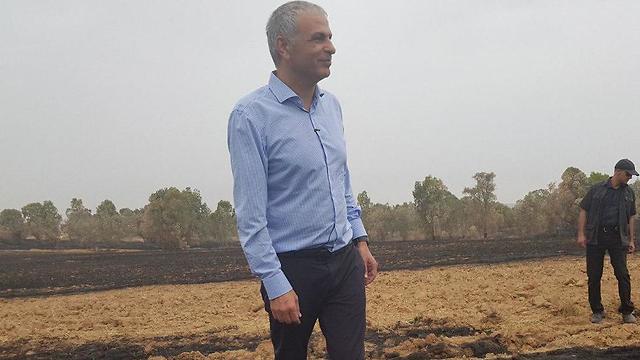 Treasury Minister Kahlon during a tour of a burned field in the Be'eri kibbutz (Photo: Haim Horenstein)

Heads of local authorities, meanwhile, sent out statements demanding the government reimburse farmers for their losses "down to the last shekel" while demanding the army place the matter atop its list of priorities.

In combating the new threat, however, the IDF was not merely on the defensive end, but also went on offense. In one instance, the army attacked a Hamas position using fighter jets in retaliation to the flying of incendiary kites. A spokesman for the IDF said after one the aforementioned attacks that the army will "continue operating against terror both above and below the ground. The IDF considers Hamas exclusively responsible for everything going on in and coming out of the Gaza Strip."