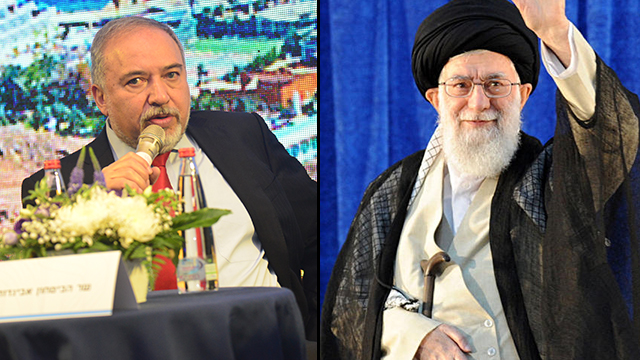 Commenting on Iranian supreme leader’s declaration that he has ordered preparations to increase uranium enrichment capacity, defense minister says ‘it’s a response to Peugeot’s announcement that it is suspending its activity in Tehran. Iran is afraid that all European investors will leave;’ Minister Katz: If Iran does good on its threats, it will be attacked by international coalition.

Iranian Supreme Leader Ali Khamenei’s announcement that he has ordered preparations to increase uranium enrichment capacity is “a sign of the hysteria and panic in the Iranian leadership,” Defense Minister Avigdor Lieberman said Tuesday.

Speaking at a conference of the Institute of Certified Public Accountants in the southern city of Eilat, Lieberman said: “It’s a response to Peugeot’s announcement that it is suspending its activity in Tehran. When such a corporation announces that it is leaving Iran because of the sanctions, it’s a sort of signal to the entire business community, to all the investors, and this is not a marginal company. This company is one of pillars of European economy, so Iran is afraid that all European investors will leave its territory.”

Lieberman went on to address the unrest in Iran, saying that “we haven’t seen strikes and protests like the ones of the past months since the Khomeini era. It’s also the truck drivers and big bazaars’ strike. There is no doubt that they’re also concerned about the economic issue.”

The defense minister added that the Iranian issue was “not an Israeli problem,” but a regional and global problem. “We see Iranian subversion not only against the State of Israel. We see them in Yemen, in Bahrain, in the Gulf, in Lebanon, so it’s a regional threat. Whoever has been listening in the past few months, in the past six months, to the leaders of Saudi Arabia, to the foreign minister, I sound like a dove of peace compared to them.

“When you see the Saudi leaders referring to the Iranian regime as ‘today’s Hitler’ and ‘Nazis’ and anything you can think about, so it’s must be way beyond Israel. So we must constantly talk about it with the international community, because a major part of the terrorist activity around the world is funded and guided by Iran, inspired by Iran. Even when you take a report about the situation of terror in the world, Iran appears there every year as the biggest sponsor of terror in the entire world.”

Earlier Tuesday, Intelligence Minister Yisrael Katz told Ynet that if Iran acted on its threats to boost its uranium enrichment capacity, it would be attacked by the US-led international coalition.

“The Iranian announcement about an intention to resume uranium enrichment for military purposes point to a complete state of panic in the leadership. The economic sanctions announced by US President Donald Trump are beginning to have an impact, even before the formal stage that will start in August.

“Many international companies—including Western European companies, from France, England, Germany and even Russia, have already announced their intention to suspend their activity in Iran because they don’t want to be subject to the American sanctions.”

According to Katz, the situation that has been created leaves Tehran with two options: Either to accept the United State’s conditions or “start a process of an economic collapse, and maybe even a regime collapse. If we learn, and we will learn, either from their announcement or some other way, that they are resuming the development of that nuclear program and advancing it, a US-led international coalition will threaten and then deal Iran a military blow.

“The Trump doctrine is very clear,” Katz added. “The president is a man of his word. He said, ‘I will cancel or change the agreement.’ There was no change, he cancelled it. He imposed harsh sanctions.

“We have made it clear that we will never allow Iran to develop a nuclear weapon, even if we have to face it alone. Fortunately, we are not alone.”

Dr. Emily Landau, a nuclear proliferation expert, believes the Iranian threat is aimed at pressuring the Europeans and making them stay in the existing nuclear agreement and accepting Iran’s demands.

“One of their demands is that the Europeans won’t harass them about the ballistic missiles and about their regional activity, that they will promise to buy oil from them and that they won’t stop any economic deals. It’s hard to see the Europeans accepting these demands,” she explained.

According to Dr. Landau, Iran is interested in maintaining the current agreement, “because it contains many advantages in return for few concessions. We have received this announcement as part of efforts made by all sides to exert pressure, but it doesn’t mean they’re headed in that direction. It will be a very radical act on their part if they actually do it, and the response will likely be firm too, at least on the American response.”