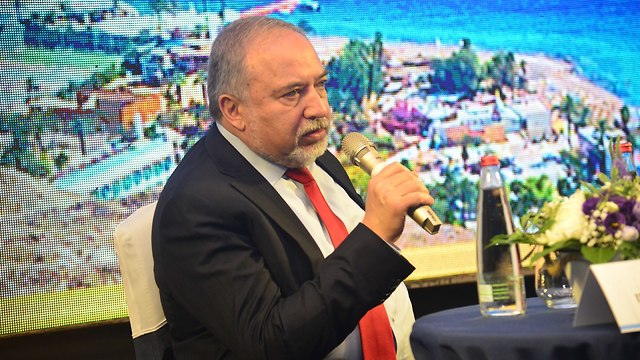 Speaking in an exclusive interview with Ynet, defense minister says any party which brings down the coalition would 'pay a price', expresses faith in Trump's ability to reach an agreement with N.Korea, which would 'impact Iran.'

Defense Minister Avigdor Lieberman asserted Sunday that the ultra-Orthodox parties would not quit the government over the Haredi draft law, warning that anyone who did topple the coalition would "pay the price."  "It doesn't look like anyone has anywhere to go. Anyone who breaks a functioning, effective right-wing government, I believe would pay a heavy price," Lieberman told Ynet in an interview. "I don't think the ultra-Orthodox have an interest in going to elections over the draft law of all things," he added. Lieberman presented the defense establishment's report on the IDF draft law to Prime Minister Benjamin Netanyahu on Sunday morning.

Defense Minister Lieberman (Photo: Meir Ohayon)
"We'll try to reach broad agreements in the coalition and bring the bill (to a vote) despite the tight timeframe," Netanyahu said.

“I believe it is a very measured draft law, built on two different parametres,” Lieberman claimed.

“When I set up a committee, I determined two criterias: one, to bypass The Chief of the General Staff, two, to bypass the The High Court. Between these aspects you can establish a state law, a serious and not a political one," the defense minister explained.

"Professionals have drafted this law, without political intervention. It is not designed to gain more votes or to put anyone down, only to solve problems which have been on the table for too many years. If there is a practical and state approach to the draft law, I believe we will pass this difficutl hurdle,” Lieberman explained.

The Defense Minister added “Firstly, I gave a free hand to the professionals because it’s obvious that I have a private and political agenda and I tried to steer clear of that and from agendas of other people. Today I am examining all the details, goals and quotas, sanctions both economical and general, etc.”

He also approached the issue of a humanitarian crisis in the Gaza Strip.

“First of all, we need to understand why the civil life in Gaza is so challenging, and there are reasons for that. For a start, it’s Mahmoud Abbas, who only last week transferred half the salaries for April, without talking about May, and amid the holiday Ramadan as well," he said.

“The second reason is that Hamas is not prepared to divert a single dollar from its spending on tunnels and missiles for the good of the Gaza residents," Lieberman argued. "$260 million was invested by Hamas in 2017 in building tunnels and in manufacturing rockets, and they’re not ready to spend a even dollar on health services or water and electricity infrastructure.”

The defense minister asserted that the Gazans “don’t deserve” humanitarian relief until the bodies of IDF soldiers and the Israeli citizen Avera Mengistu which are being held by Hamas are returned to Israel.

He further claied that Hamas only wants relief measures such as the lifting of the blockade to smuggle weapons and Iranian agents rather than to promote economic development.

Economic relief, he insisted, would not calm the situation. “Those who say it’s that simple are delusional. Like those who said 'land in exchange for peace.' We left Gaza and got missiles and tunnels in return. Anyone who preaches that economic relief will put an end to terror, to protests near the border or to incendiary kites, is wrong and misled—plain and simple. It would not make a difference to our conflict with Hamas.”

According to Lieberman, Israel's main concern is Iran's presence in Syria and pushing Tehran's forces away from the Golan Heights.

"All we're interested in when it comes to Syria is the complete evacuation of Iranian and Hezbollah forces. Nothing short of that," he said.

"This is our position, and we're having a dialogue about this with the entire international community, including Russia and the United States," he added. "I think our position is clear to everyone, to all of those involved here in the Middle Eastern arena. When we have reached an agreement and get willingness from everyone to act to remove Iranian and Hezbollah forces, then we could say we've achieved our goal."

The Wall Street Journal reported on Friday that Hezbollah and Iranian militia fighters have reportedly returned to southern Syria dressed in Syrian army uniforms and under Syrian flags.

Lieberman, however, said only "a few dozen" Hezbollah members remain in southern Syria, "who serve as advisers or goaders."

Turning to the upcoming summit between US President Donald Trump and North Korean leader Kim Jong Un, Lieberman said he believed that an agreement would be reached between the two countries over Pyongyang’s nuclear arsenal, and that it would ultimately have an impact on tensions between Israel and Iran.

“It is important that the Trump administration achieves the main goal, which is dismantling North Korea’s nuclear arsenal and its nuclear capabilities," he said. "Of course, we would welcome this. A dramatic change of this kind would influence all international spheres, including Iran and its nuclear program. It is undoubtedly a dramatic thing.”