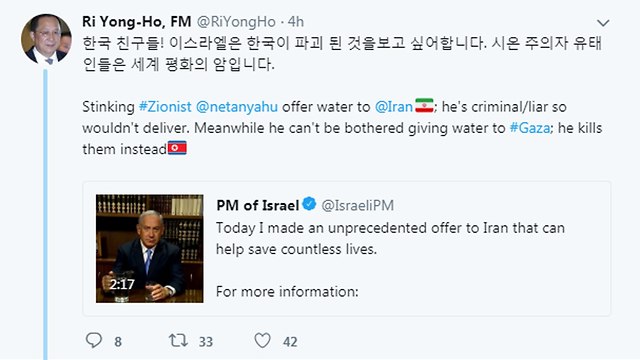 While the North Korean leadership prepares for Kim Jong-un’s historic meeting with US President Trump, Foreign Minister Ri Yong-Ho finds the time to lash out at the Israeli prime minister on Twitter following his offer to help Iran with water tech; Also on Twitter, Iranian Supreme Leader Khamenei refers to Netanyahu as ‘the children-killer PM of the Zionist regime.’

While the North Korean leadership prepares for Kim Jong-un’s historic meeting with US President Donald Trump, North Korean Foreign Minister Ri Yong-Ho found the time to lash out at Prime Minister Benjamin Netanyahu on Monday morning. Ri shared the Israeli leader’s offer to help Iran with its water tech on Twitter, and wrote in response: “Stinking Zionist Netanyahu offer water to Iran; he’s criminal/liar so wouldn’t deliver. Meanwhile he can’t be bothered giving water to Gaza; he kills them instead.”

North Korean foreign minister responds to Netanyahu's tweet
Israeli Foreign Ministry Spokesman Emmanuel Nahshon replied to the tweet, saying: “On the bright side—you follow us on Twitter and react. On the negative side—you insult us with no reason. Israel is a peace seeking nation, defending itself against a brutal and hate filled Iranian regime seeking our destruction.”

On Sunday, in a video clip posted on Facebook with Farsi subtitles, Netanyahu offered the Iranian population Israel’s assistance in helping save “countless Iranian lives” with its water technological expertise from the “cruel and tyrannical regime that denies them vital water.”

“Today I’m going to make an unprecedented offer to Iran. It relates to water. Israel stands with the people of Iran and that is why I want to help save countless Iranian lives. Here’s how,” he said.

Khamenei wrote on Sunday night, “The children-killer PM of Zionist regime—the Shimr of the time—visits Europe to play the victim, claiming, Iran wants to eliminate our population of a few millions.' European audience listens, nods and refuses to say, 'You (Zionist regime) are committing crimes in Gaza and Quds.'

US President Trump said on Monday his historic summit with North Korean leader Kim in Singapore could "work out very nicely" as officials from both countries met to narrow differences on how to end a nuclear stand-off on the Korean peninsula.

Kim and Trump arrived in the tropical city-state on Sunday for the first ever face-to-face meeting by leaders of two countries that have been enemies since the 1950-1953 Korean War.

With gaps remaining over what denuclearization would entail, officials from both sides held two hours of talks to push the agenda forward ahead of Tuesday's summit.

US Secretary of State Mike Pompeo said in a statement that the meetings were "substantive and detailed" but there was no immediate word on what the outcome was.

"We've got a very interesting meeting in particular tomorrow, and I just think it's going to work out very nicely," Trump said.

He also told Lee: "We appreciate your hospitality and professionalism and friendship...You're my friend."

Lobster bisque, beef tenderloin and ice cream were on the lunch menu, and there was also an early birthday cake for Trump, who turns 72 on Thursday.

Kim remained ensconced in the heavily guarded St. Regis Hotel where he is staying. There was also no sign of his sister, Kim Yo Jong, who has accompanied him to Singapore.