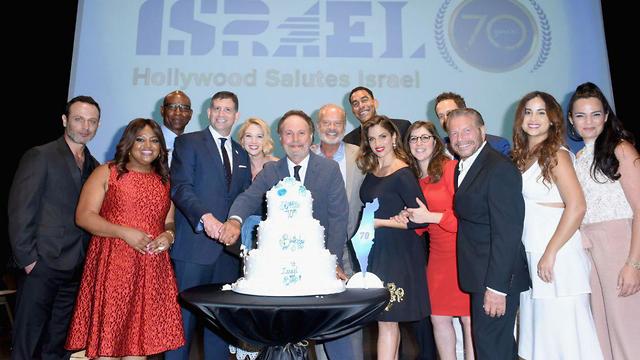 A host of actors and producers, as well as prominent sports personalities, gather at Universal Studios in Los Angeles in a show of support for the State of Israel; Prime Minister Benjamin Netanyahu and actress Gal Gadot make an appearance via special video messages.

The Israeli Consulate in Los Angeles held a multi-participant event at Universal Studios earlier this week, as part of the American film industry's demonstration of support dubbed "Hollywood salutes Israel."

Many celebrities, public officials, studio managers, and prominent figures in the movie industry attended the event.

Israel's achievement were spread across its seven decades, with each decade being depicted by an American or an Israeli celebrity while combining art bits, song and multimedia.

Many others sent video messages, the first of which was from the Prime Minister Benjamin Netanyahu, as well as from actors such as Michael Douglas, Barbara Streisand, Robert De Niro and Gal Gadot–who is currently in London filming the second installment of "Wonder Woman."

Consul-General of Israel in Los Angeles Sam Grundwerg said ,“This evening we received the most appropriate answer to those who persecute Israel and try to boycott it and undermine its very existence. We need to feel proud by the support shown here that not only strengthens the ties between the two nations but also between the film industry and Israel.

Kelsey Grammer, who presented the story about the declaration of the State of Israel, said: “After 2000 years of exile they dreamed to be a free nation in their country, driven by their dream, they established institutions of a prospering and democratic country.

"They built farms, cities, schools and established professional unions, businesses, newspapers and orchestras. They reincarnated the Hebrew language and made it their mother tongue spoken at universities, at basketball arenas and in taxis.

"During those decades, Israel has turned into a leader in water technologies. Actually Mayim Bialik knows a lot about this,” Grammer jokingly concluded.