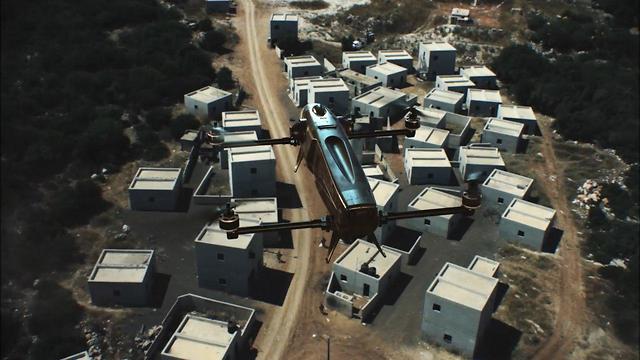 The new 5.5kg IAI-made Rotem L drone, which is designed to crash into soft targets and is capable of aborting missions at any moment upon detection of non-combatants, delivers on all expectations.

Israel Aerospace Industries (IAI) conducted last week an experiment to test the abilities of the new Rotem L drone system—a miniature grenade-carrying UAV designed to crash into, and explode soft targets, while protecting the saftey of non-combatants in the vicinity.

During the experiment that was held in south Israel, the drone struck an array of simulated targets, including terror cells, explosive devices, and unarmored enemy vehicles.

With the the drone and the grenade combined weighing in at a mere 6.5kg, and an easy-to-use small operating system, any infantry battalion combatant would be able to carry three drones on his back and launch them one by one.

After scanning the area, the drone transmits intelligence it has gathered via a special charger to its operator. The image transmitted is then displayed in high resolution and can be viewed via tablet. While the combat soldier remains sheltered in his hidden post in the field, he sends the drone the target's coordinate data, providing accuracy, efficiency and safety.

When the drone reaches a distance of 100 meter from the target, its small yet powerful electric engine rapidly picks up speed, accelerating to 100 km/h until striking the target and releasing lethal shrapnel.

If the drone is deemed fit for operational use, a combat soldier would be given the ability to strike three different enemy targets in various locations.

The IAI developed the system based on its big cruising drone-missile system which was created more than 30 years ago. Composed mainly of plastic and only partially of complex materials, the drone can be quickly and simply operated from the moment it is drawn from the soldier's back and launched into the air—all within a few seconds.

Delays are also reduced in the flight operation since the Rotem L takes off automatically and adjusts itself to the environmental conditions—such as weather—while operating to ensure its effectiveness and survival.

During the experiment, the tactical multi-blade drone was put under its first difficult test when it was forced to operate in the desert's hard weather conditions which included strong winds. Nevertheless, accurate strikes were recorded.

One of the system's main advantages—apart from its relatively low price—is the range in which it is able to operates. Indeed, it can reach distances of up to 10km from the operating combat soldiers and can remain in the air for 45 minutes.

The combat soldier also has the ability to reduce the impact of the strike at any time prior to hitting the target, catering for last-minute abort capabilities or precautionary measures to avoid civilian casualties to minimize collateral damage.

The presence of non-combatants is brought to the operator's attention by a mini camera capable of identifying civilians within the radius of the strike.

If uninvolved elements are spotted, the tree drones simultaneously launched by the same soldier can return to a predetermined coordinate and wait for other assignment.

"This system is relatively cheap since a grenade is an inexpensive weapon," an IAI official explained,

IAI has also developed a similar drone that operates with a different method, carrying a shotgun which shoots at a target before returning to its launch point.

In anticipation of providing the IDF with the Rotem L drones it had purchased, the IAI are currently in the final stages of establishing the systems' production lines.

Offense drones such as the Rotem L have been on the market for years. However, the IDF has delayed purchasing them mainly due to security considerations and out of fear that the unmanned system would harm non- combatants or fellow soldiers on the battlefield.

The IAI has developed a unique security patent that enables the Rotem L drone to be completely dismantled and separated from the grenade it carries, essentially raising further the system's safety level.