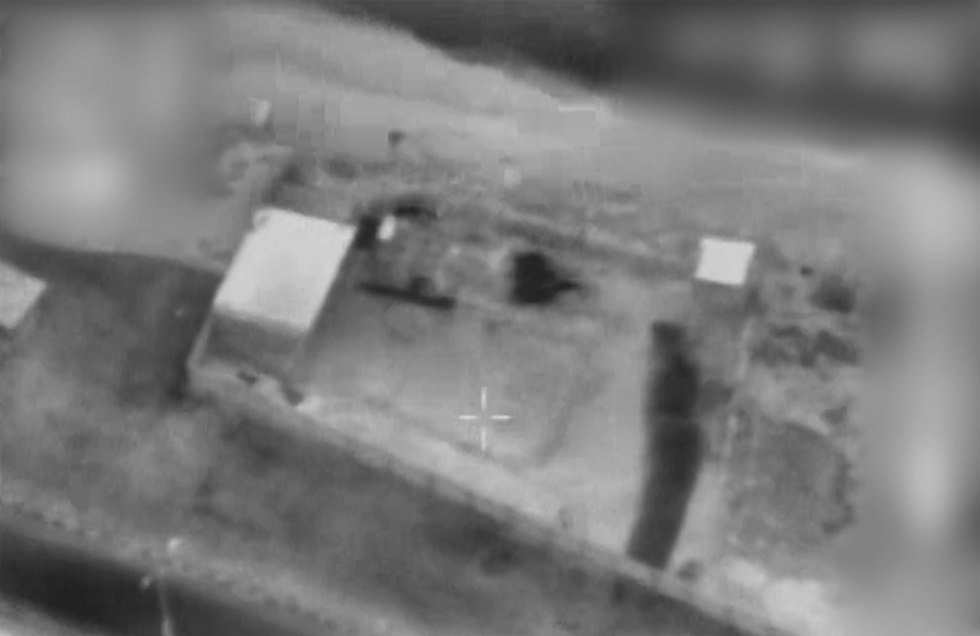 IDF hits two military bases and a weapons production facility in northern Gaza in retaliation for continued incendiary kites and balloons launched from the strip at Israel; 3 rockets fired at Israel during early morning attack, one likely fell inside Gaza.

Israel Air Force jets attacked nine Hamas targets in the northern Gaza Strip early Monday, in what were the most significant strikes in the fight against the incendiary kites and balloons terrorism.

During the strike, three rockets were fired at the Hof Ashkelon Regional Council, with one apparently falling inside the strip. They were accompanied by Code Red rocket-alarms at 4:40am and again at 5:13am, with the latter one heard in the city of Ashkelon's industrial area as well.
IAF bombs Hamas targets in Gaza    (צילום: דובר צה"ל)
X

No casualties were reported from the rockets or air strikes.

The IDF Spokesman's Office said the strikes were in response to the incendiary and explosive balloons and kites being launched at Israel from the Gaza Strip.

"These are terror attacks that endanger the residents of southern Israel," the IDF said in a statement.

IAF strikes in the strip
X

IAF strikes in the strip

"In recent days, the IDF warned and carried out several attacks near the cells responsible for the arsons and destruction of lands in Israel as well as infrastructure used by these cells," the army added. "The IDF has intelligence information and the operational ability to further increase these strikes, and they will grow in strength as required. The IDF is determined to continue acting with increasing force against these terror activities for as long as it takes and with a variety of tools, until they stop," it went on to say.

"The Hamas terror organization is responsible for everything that happens in and from the Gaza Strip, and it will suffer the consequences," the statement concluded.

In recent days, the IDF has taken measured steps in the Gaza Strip, firing warning shots from the air and destroying property belonging to the kite launchers but has refrained from targeting them. Some Israeli ministers have called for those launchers to be targeted directly.

The kite terrorism has been plaguing the Gaza border communities for two and a half months now. Palestinians have sent kites dangling coal embers or burning rags across the Gaza border to set fire to arid farmland and forests, others have carried small explosive devices in a new tactic that has caused extensive damage.

Israel has drafted in civilian drone enthusiasts as army reservists, instructing them to fly their remote-controlled aircraft into the kites, an Israeli general said, but an effective means to stop the kites has yet to be found.

Seventeen fires broke out on Sunday as a result of the incendiary kites and balloons, with hundreds of turkeys suffocating to death in Ein HaShlosha from smoke inhalation.

Earlier, police sappers were called to a home in the moshav of Beit HaGadi in south Israel after two balloons carrying objects suspected of being incendiary devices landed in a residential backyard tree.

An initial investigation revealed that the objected attached to the balloons, which were likely flown from the Gaza Strip into the moshav near Netivot, were incendiary devices.

Three more balloons, also affixed with incendiary devices that were flown into Israel from Gaza at around the same time, were found in a tree in the suburbs surrounding the southern city of Sderot. Firefighters and security forces were called to the scene.