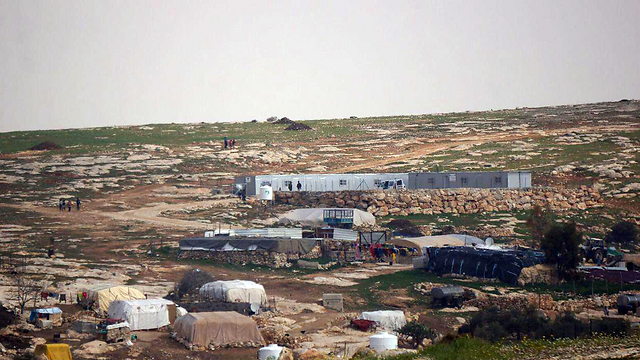 After hundreds of police officers and soldiers were recruited to evacuate and demolish five illegal structures in the Palestinian village of Khirbet Susya in South Mount Hebron, an order arrived from the Prime Minister’s Office to postpone the operation, likely due to the upcoming visit of US President Trump’s Mideast envoy and special advisor this weekend.

Prime Minister Benjamin Netanyahu has ordered the postponement of the evacuation and demolition of five illegal buildings in the Palestinian village of Khirbet Susya in South Mount Hebron.

The demolition, which was scheduled for Tuesday morning, is being postponed following international pressure, Ynet has learned. This is the third time in the past few months that the evacuation is put off.

Everything was already prepared for the evacuation. The Central Command and the Coordination of Government Activities in the Territories had prepared an operation order, and hundreds of police officers and soldiers were recruited and placed on high alert. The Defense Ministry had hired civilian execution contractors and heavy equipment for the explosive demolition. But at around 10 pm Monday, an order arrived from the Prime Minister’s Office to stop the evacuation.

The demolition of illegal Palestinian homes in Khirbet Susya is seen as one of the symbols of the Palestinian battle in the West Bank, and Israel has been under heavy international pressure—mainly in recent weeks—to prevent the evacuation which would have received wide international coverage.

The demolition may have also been postponed due to the upcoming visit of US President Donald Trump’s envoy to the Middle East, Jason Greenblatt, and his special advisor and son-in-law, Jared Kushner, this weekend.

The timing of the demolition, which has been postponed to an unknown date, is politically sensitive too. In the past week, the security forces evacuated two Jewish outposts in the West Bank—Netiv Ha’avot in Gush Etzion and Tapuach West in Samaria.

The Regavim movement, which led the High Court petition against the Palestinian outpost, offered the following comment: “In the past week, Netanyahu implemented the demolition of the Netiv Ha’avot neighborhood and Tapuach West, but avoided demolishing the Palestinian Authority’s outpost in South Mount Hebron.

“Netanyahu can’t just blame the High Court and the left-wing organizations, when he is essentially imposing strict enforcement against the settlements while demonstrating weakness and zero action against the Palestinian Authority’s intensive and illegal activity.”