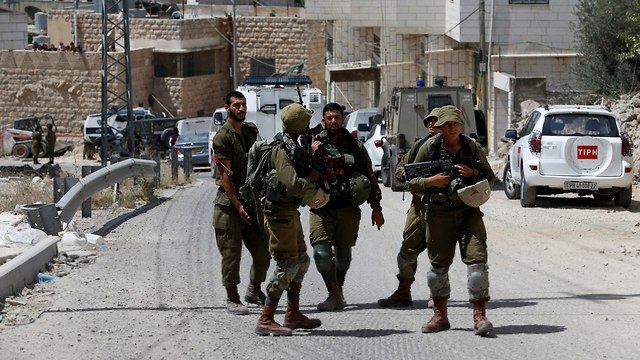 Op-ed: Banning filming won’t prevent filming. Photos and videos can be taken from every window in Hebron and sent to news desks around the world. The photographers won’t get caught, and the damage will be much greater, because they will talk about a less democratic Israel with something to hide.

Israel is repeatedly insisting on defeating itself. Here’s another example: Knesset Member Robert Ilatov submitted a bill seeking to prevent offensive filming of IDF soldiers. The proposal won’t be approved. But like similar bills from the same school of thought, it is already causing damage.

The number of cameras in an area like Hebron, which provides a considerable amount of the fuel for the industry of lies against Israel, is the highest in the world per territory. Every few months, the cameras succeed in exposing an exception. That actually proves that IDF soldiers routinely maintain reasonable behavioral norms.

As a senior officer in the area once told me, every brigade has one or two soldiers who violate orders. But they are the only ones displayed, and that is indeed harmful.

Banning filming won’t prevent filming. There is no such option. Photos and videos can be taken from every window in Hebron and sent to news desks around the world. The photographers won’t get caught, and the damage will be 10 times greater, because they will talk about an Israel which also has something to hide and is also becoming less democratic.

In fact, we don’t have to wait. The Washington Post has already reported that “filming Israeli soldiers in action could soon become a crime.” That won’t happen.

But the problem isn’t the reports on the matter. The problem is that the government has approved the proposal and that it has already passed a preliminary reading, although there is no chance it will be voted into a law. Like similar bills, the purpose is to make a political gain, despite the fact that it’s an own goal on the diplomatic and PR level. But to hell with the national interest, as long as there is a political gain to be made.

In the service of BDS

Three decisions popped up in our little country this week: First, Tel Aviv Mayor Ron Huldai decided to prevent the Chabad movement from holding a rally in Tel Aviv, because as is the Haredi custom, men and women would be separated.

Second, the Magistrate’s Court and the District Court rejected an appeal by the Jerusalem Municipality to prevent a conference starring declared BDS supporters from being held on municipal property.

And third, the District Court rejected the interior minister’s decision to revoke the citizenship of a Palestinian from the territories who had become an Israeli citizen, because he carried out a terror attack. The attorney general joined the interior minister’s stance. “In my view,” the judge wrote, “this is an extreme sanction,” because the terror attack wasn’t “an unusual or radical act.”

A municipality’s decision to prevent the use of municipal property for propaganda serving people who deny Israel’s right to exist is not just a reasonable decision, it’s the only decision that should and must be made by any public authority. This decision is in line with the law banning the funding of events which include racism and/or a denial of the State of Israel’s right to exist as a Jewish state. Even when there was no explicit law, and even before the activism era, the Supreme Court decided in the 1960s, in the Yardor affair, to disqualify a Knesset list that denied Israel’s right to exist. And now, when there is a law, the legal sophistry makes it possible to crush the law, and mainly to crush common sense.

To understand the absurdity, it should be mentioned that only several days ago the Berlin municipality decided to ban a Scottish band from participating in Germany’s major music festival simply because it supports the BDS movement. Earlier, last month, the Berlin municipality decided that a boycott of Israel is a manifestation of anti-Semitism. A German intelligence report determined once again that this is anti-Semitic activity. The working definition of anti-Semitism, which was adopted by the European Parliament last year also clarifies that denying Israel’s right to exist is a manifestation of anti-Semitism. So it’s banned in Berlin, and it’s clear to the European Union, but in Jerusalem of all places—anti-Semitic activity is legitimized.

We are left with Huldai’s decision. The Tel Aviv Mayor, might I remind you, participated in October 2017 in a conference in support of the Arab-Hebrew Theater. The event was also held on the background of the performance of a play glorifying a terrorist murderer who is serving time in prison. The playwright herself is part of the BDS.

When it comes to a BDS-affiliated campaign, Huldai enlists; when it comes to Haredim, he forbids them to convene because of gender segregation. It wouldn’t happen in Berlin, but it’s happening in Tel Aviv and in Jerusalem. I am speechless.