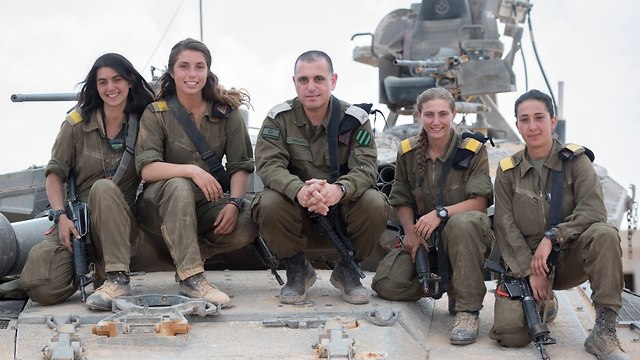 The women participated in a pilot designed to integrate women in border defense system; Armored Corps commander praises their determination, welcomes the ‘huge potential’ they offer.

Four female combat soldiers participated for the first time ever on Thursday in a graduation ceremony for a tank commanders' course at Yad LaShiryon Armored Corps Memorial Site and Museum at Latrun after completing their training as tank crewwomen.

The female soldiers were part of a pilot training course aiming to integrate women into the border defense system.

Chief of Staff Lt. Gen. Gadi Eisenkot will reach a final decision on how to integrate the female soldiers as tank commanders after the Armored Corps and the border defense establishment present their recommendations on the matter.

An additional discussion addressing the matter will be held by the General Staff forum.

The four new tank commanders who made history are Noga Shina, 20, from Binyamina, Shiran Tetroashvili, 20, from Gan Yavne, Charlotte Feld-Davidovici, 20, who moved to Tel Aviv from London two years ago, and Osnat Levi, 19, from Jerusalem.

The pilot included basic tank training as a loader, a gunner, a tank driver, and a tank commander, as the soldiers exercised in enclosed spaces and in open areas and operational and received operational experience on the Egyptian border.

Ten female soldiers successfully completed the training, while four of them were sent to the tank commanders' course. Noga, Shiran, Chrlotte and Osnat will gain additional command experience in the near future and, together with the six other soldiers who had gone through basic tank training with them and returned to serve as combat soldiers in the Karakal Battalion, will constitute the base for the tank crewwomen framework that will be established during the upcoming fall.

Five soldiers dropped out during basic training, with two terminating their participation due to medical issues unrelated to their training, according to the IDF. Two others did not complete the course due to professional reasons and one left the course due lack of motivation.

According to Chief Armored Corps Officer Brig. Gen. Guy Hasson, the female combat soldiers did not suffer any injuries during training.

"Today we know how to conduct the selection process (determining who is suited to go through basic tank training), what is the physical significance of being a tank crewwoman and how to accompany the soldiers' training," Hasson said.

"This move (of incorporating female soldiers as tank crewwomen) has a big potential for gain in the long run since it will enable us to use male combat soldiers for longer training and improve our readiness for war," he added.

According to Hasson, the soldiers will initially remain in the southern area near Sinai, a particularly quiet and stable border.

"However, it has not yet been decided in which area the tank crewwomen will serve," Hasson explained.

"After reviewing the matter, the chief of staff will determine how many tank crewwomen will be included in the border defense system, how to manage the new resources and their significance.

"Preparations for the pilot were executed professionally and for the first time with no time restrictions," the chief armored corps officer continued.

The tank combat female soldiers are not expected to take part in the next war. Nevertheless, Hasson stressed that "If the need to perform a chase into the enemy's territory arises as part of routine security measures, they would be able to perform the task."

He further described the potentional for utilizing the femal tank commanders as significant.

"They want to contribute and to be a part of the border defense system. They are professional and determined. We did not cut them any slack, we did not compromise (as far as their training is concerned—ed), and they know that," he said with pride.