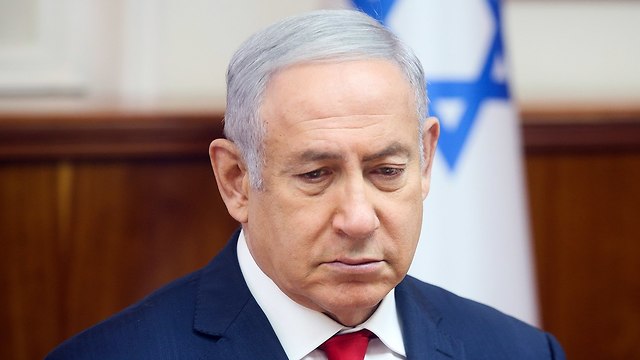 Netanyahu warns enemies they'll 'regret dragging us into a conflict'

Speaking at a pilot graduation ceremony in south Israel, the prime minister says Israel's efforts against Iran bearing fruit, promises to remove Iranian influence from Syria, while defense minister asks Israelis to 'trust us' as he seeks to reassure them security establishment working in Israel's best interests; 'We will do what we need to do, when we need to.'

Prime Minister Benjamin Netanyahu warned Thursday evening that “whoever drags us into a conflict will very much regret it,” in reference to the surge in tensions on Israel's northern and southern border.

"Dangers are all around us—and the Air Force has a central role in thwarting them. The aggression in our region of Iran and its proxies is not fading. Iran has etched on its banner the desire to destroy us. I state unequivocally: We will not allow Iran to develop nuclear weapons," the prime minister said as he delivered a speech during an Order of the Wings ceremony at the Hatzerim Air Base in south Israel, marking the conclusion of a pilots course from which 33 men and three women graduated.

"We will continue to take strong action against Iran's plan to turn Syria into a deadly missile base against us," he vowed.

A significant segment of Netanyahu’s speech was dedicated to the latest developments in Iran, to the nuclear agreement and the economic decline that has beset the country as renewed US sanctions loom.

"States and companies are abandoning the Iranian market and the mass demonstrations in Iran show that our efforts to put Iran in its place are bearing fruit,” the prime minister continued.

"It was not always like this. At first we stood alone in our opposition to the bad nuclear agreement with Iran, an agreement which financed its expansionist and aggressive designs. But it is good that we did not slacken because President Trump's historic decision to quit the nuclear agreement is creating a strategic turnaround in Israel's strategic situation."

Iran, he said, is caught in an economic upheaval as a result of the expected American sanctions.

"The great flow of money into its coffers has come to a screeching halt. The Iranian people are feeling in their pockets the consequences of the fundamentalist fanaticism of their rulers," Netanyahu stated.

He was focusing on Iran, he explained, because it is "the greatest threat to our existence and we are determined to block this threat."

Pilot course graduates (Photo: IDF Spokesperson's Unit)
Speaking after the prime minister, Defense Minister Avigdor Lieberman took to the rostrum to address the fresh graduates. “We, as Israelis, are impatient, we want everything immediately and now—peace now, war now, a decision now. But serious and responsible security policy cannot be in response to media or public pressure,” Lieberman said.

Defense Minister Lieberman next to President Reuven Rivlin and IDF Chief Gadi Eisenkot (Photo: Mark Nayman/GPO)
“The State of Israel is facing many challenges in the north and the south. The peace and security of the southern and northern residents, like all Israeli citizens, is at the top of our agenda,” he emphasized. The speeches come as residents in south Israel grow increasingly frustrated with the continuation of rocket fire from Gaza and the launching of incendiary balloons and kites that have set acres of farmland alfame. “Trust us that we are acting responsibly and considering Israeli interests. We have no intention of being dragged around but rather of leading. We will do what we need to do, when we need to,” the defense minister vowed.