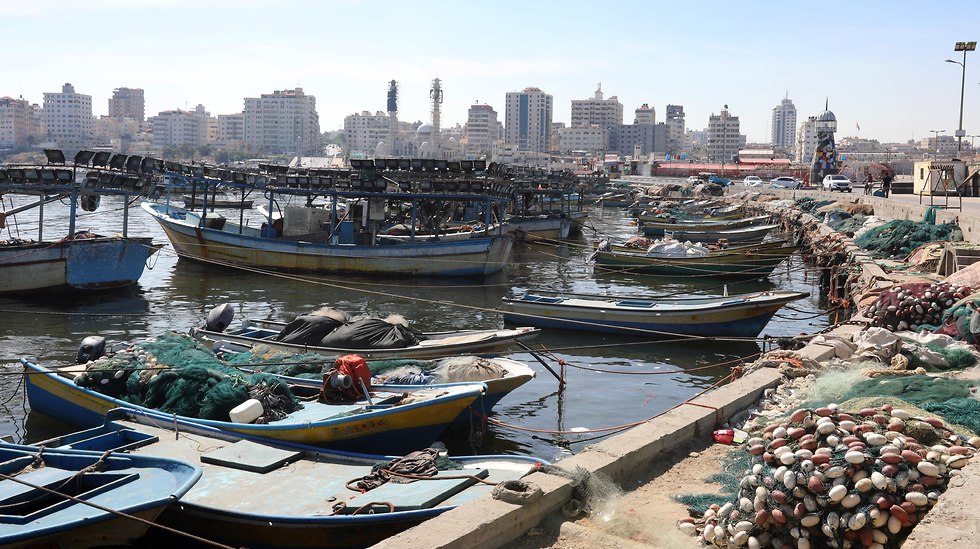 Amid reports Israel is examining possibility of building sea port for the strip in Cyprus, Hamas, Islamic Jihad officials say they've yet to see any concrete plans, while PA official asserts Trump using Gaza crisis as excuse to reach 'deal of the century.'

The rival Palestinian factions Fatah and Hamas are divided over Israel's plans to buld a sea port in Cyprus to serve as a hub for the transfer of goods to blockaded Gaza in an effort to alleviate the humanitarian plight in the densely-populated enclave.

Defense Minister Avigdor Lieberman is pushing for the plan, which is contingent on Hamas returning to Israel the bodies of two soldiers killed during the 2014 Operation Protective Edge, in addition to three living Israelis being held captive by Hamas.

The proposal is believed to have been discussed in meetings between Prime Minister Binyamin Netanyahu and senior White adviser Jared Kushner and Middle East envoy Jason Greenblatt, who just finished a regional tour focused on improving the situation in Gaza.

(Photo: EPA)
“I can’t confirm or deny the deal,” Abdl Al-lateef Qanou, a Hamas spokesperson, told The Media Line. “We were informed about it from the media, but I need an official offer from the (Israeli) government to reveal my official position. If that happens, we have to first study and then reply.” Dahoud Shihab, an Islamic Jihad spokesperson, revealed to The Media Line that “up until now, what has been presented isn’t clear or specific. But in general, ending the terrorist aggression in the form of the siege is a Palestinian demand and legitimate right of the Palestinian people.” Shihab also stated that if Israel insists on discussing the fate of its missing soldiers and citizens in Gaza, it must keep in mind that there are “a huge number of members of the Palestinian resistance in Israeli jails.” When asked whether Gaza-based Palestinian factions would circumvent the Palestinian Authority by forging an agreement directly with Israel, Shihab explained that “Palestinian unity is the key to accomplishing national achievements, but the (PA) doesn’t abide by its obligation to ease the sanctions on Gaza in order to end the suffering and achieve reconciliation.”

For its part, the Palestinian leadership in the West Bank immediately came out against the purported initiative, with a Fatah spokesperson telling The Media Line that, “we warn Hamas not to deal with these American and Israeli ideas as they are just an illusion of helping the humanitarian situation in the strip.”

Osama Qwasme further contended that the Trump administration is responsible for the conditions in Gaza as the White House cut off aid to both the PA and the United Nations Relief and Work Agency, which supports Palestinian refugees in Gaza along with the West Bank, Lebanon, Jordan and Syria.

“(Trump) is trying to pass the 'deal of the century,' which was calculated to serve Israel,” Qwasme asserted, “and he is using Gaza’s crisis as an excuse by which to achieve this. The aim of this deal is to manipulate the Palestinian national position to benefit Israeli interests.” The PA already rejected out of hand the Trump administration’s yet-unveiled peace plan, and has, in fact, been boycotting American officials for the past six months in the wake of Washington’s recognition of Jerusalem as Israel’s capital.

Hani al-Masri, a Palestinian political analyst who met with Hamas and Islamic Jihad representatives in Gaza this week, explained that the ability to finalize a deal depends largely on Israel’s demands.

“Israel wants to disarm the resistance groups in the strip and have them recognize Israel as a state,” he noted to The Media Line, adding that these are absolute non-starters for Gaza’s rulers and therefore any proposal based on such conditions is not worth discussing.

Al-Masri also stressed that “the collapse of the situation in Gaza will impact negatively on Israel, Egypt, Europe and the United States.” He thus believes that it is in the interest of all parties to arrive at a compromise.