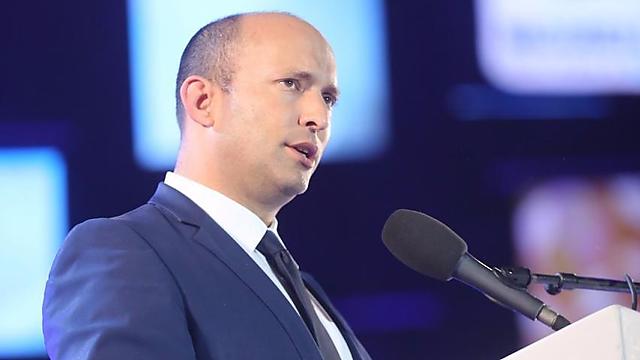 New study unit will make it a requirement to teach Israeli students on trips to Poland about Poles' treatment of Jews before, during and after the Holocaust; 'We cannot possibly educate our children on distortions and lies,' education minister says.

Education Minister Naftali Bennett, who came out against the joint Israeli-Polish statement on the Poles' role in the Holocaust, is taking steps to combat it, Ynet learned on Friday. First, Bennett announced the controversial statement, which was issued by Prime Minister Benjamin Netanyahu and Polish Prime Minister Mateusz Morawiecki, will not be part of history lessons about the Holocaust in schools. The education minister has also decided to include a mandatory study unit about the Polish population's treatment of the Jewish people during World War II as part of the training given to tour guides who accompany Israeli students' educational trips to Poland.

Education Minister Naftali Bennett (Photo: Gideon Sharon)
The study unit will deal with the Poles' treatment of Jews before the Holocaust, during the Nazi occupation of Poland, and after the war. It will highlight the Polish population's widescale cooperation with the Nazi regime, including informing on Jews, turning them in and the direct murder of Jews. Alongside that, the study unit will also feature the actions of the Righteous Among the Nations—Polish people who risked their lives to save Jews. While the Polish people's treatment of Jews during World War II has always had a prominent part in the curriculum, the tour guides were not required to specifically focus on the involvement of Poles in the murder of Jews. Bennett's new instructions will make the topic part of the mandatory requirements.

The mandatory study unit will be incorporated into the various educational activities done during the trip to Poland, which include visits to historical sites that relate to the Holocaust, as well as pogroms against Jews before the war.

Jewish youth at the Auschwitz death camp in Poland (Photo: Yossi Zeliger)
"In the face of the attempts to launder the Poles' actions against Jews in the Holocaust, we will increase studies on the topic," Bennett told Ynet. "Many Poles aided the Nazis and murdered Jews during the Holocaust—this is a fact that cannot be argued. This truth will be taught to the students of Israel exactly as it happened, so they can have in-depth knowledge of what happened on Polish soil, the biggest Jewish graveyard in the world." The education minister went on to say that while he understands the importance of Israel's relations with Poland, "We cannot possibly educate our children on distortions and lies." "The importance of this statement is not specific to this time; this is a tragedy that would affect generations to come. Thousands of students will be mistaken in thinking most of the Polish people aided the Jewish people and only a minority murdered Jews during the Holocaust, while the opposite is true," he continued. "We will deepen the education on the topic and insist that the false narrative this statement is trying to establish will not be included in the education of the future Jewish generation," Bennett vowed.

During the war, Jews from across Europe were sent to death camps built and operated by Germans in Nazi-occupied Poland—home to the continent's biggest Jewish community at the time—including Auschwitz, Treblinka, Belzec and Sobibor.

Last week, Poland's ruling conservatives watered down the proposed law, which had drawn Israeli and US condemnation, and removed the threat of jail terms for anyone suggesting the nation was complicit in Nazi crimes against the Jews.

Their statement went on to praise the wartime Polish government-in-exile, saying it tried to "raise awareness among Western allies of the systematic murder" of Polish Jews.

But Yad Vashem said its own "thorough review" showed "that the historical assertions—presented as unchallenged facts—in the joint statement contain grave errors and deceptions."

"The Polish government-in-exile, based in London ... did not work decisively during the war on behalf of Poland's Jewish citizens," Yad Vashem said.

"Much of the Polish resistance in its various movements not only failed to help Jews, but was also not infrequently actively involved in persecuting them," it said.

The United States Holocaust Memorial Museum backed Yad Vashem's position Friday, saying the revision lawmakers made last week "does not address our primary concern, which is the potential for intimidation, self-censorship and politicization."

The reaction in Israel "confirms our belief that we need to further enhance the cooperation of Polish, Israeli, and Jewish historians, teachers and museum guides to protect the truth about World War II and the Holocaust," he said.

This week, a Polish state-run bank, PKO Bank Polski, paid for ads in major international newspapers to publish the full statement -- an example of how Polish state authorities harness the profits of state enterprises to support their ideological positions.

The bank told The Associated Press Friday that it will not publicize how much it paid for the ads, which ran in The Washington Post, the Wall Street Journal and major papers in Germany, France, Spain, Britain and Israel.

In an emailed statement, PKO Bank Polski Foundation President Malgorzata Glebicka said the campaign was part of a broader "mission of disseminating historical truth and building an accurate image of Poland in the world."

The bank has also faced some questions for paying what was likely a large sum to get the statement a wide audience.

"It is sad, all things considered, that a bank in which millions of Poles hold their savings wasted its funds to troll the Israeli public," said Michal Bilewicz, a social psychologist at Warsaw University who specializes in the Holocaust. "On the one hand, they lower interest rates on accounts, and on the other hand they spend millions on government propaganda."