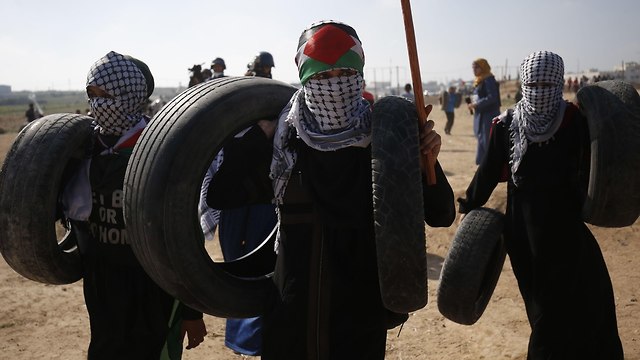 Explosive device goes off early near Karni crossing, wounding several Palestinian terrorists trying to hurl it at Israeli troops; Mohammed Abu Halima, 22, killed in clashes, with cause of death in dispute; IDF battles 3,000 Palestinians rioting near the border fence.

A Palestinian taking part in a border protests was killed on Friday, Gazan medical officials said, with different reports on his cause of death.

He also said Israeli shelling wounded eight people in the same location, east of Gaza City, though it was not clear if the two incidents were linked.

Qudra did not have details on the source of the shrapnel, but Palestinian eye witnesses told AFP Abu Halima was wounded when a device he was holding exploded.

The IDF denied shelling, saying troops used riot dispersal measures, including gunfire, as they confronted 3,000 Palestinians at five points along the border fence, some rolling burning tires and throwing rocks.

The IDF further said a number of terrorists attempted to approach the security fence with the intention of hurling an explosive device at soldiers adjacent to the Karni crossing in the northern Gaza Strip.

"The explosive device went off within the Gaza Strip and injured several Palestinians," the army said in a statement. "No injuries to IDF soldiers were reported."

The Gaza Health ministry said almost 400 people were wounded in Friday's protests, 57 of them from live bullets.

"The Hamas terror organization is using different measures to carry out terror attacks during the violent rioting. The Hamas terrorists take advantage of the crowds and under the cover of the protests operate and endanger the residents of the strip, turning them into a cover for terrorism," the IDF said.

The Palestinian Centre of Policy and Survey Research said on Wednesday that 74 percent of Palestinians believe the protests have not achieved their goals or achieved little.

Its poll found 61 percent of Gazans believe Hamas is responsible for the "initiation and organization" of the border protests.

Incendiary kites and balloons from the Gaza Strip continued causing fires in Israel on Friday, with some 60 dunams (15 acres) burned at the Reches Gvar'am Reserve and some 300 dunams (74 acres) in the Ruhama Kurkar nature reserve northwest of Sderot. Some 5 dunams (1.2 acres) burned in the HaBesor Stream area as a result of another fire.