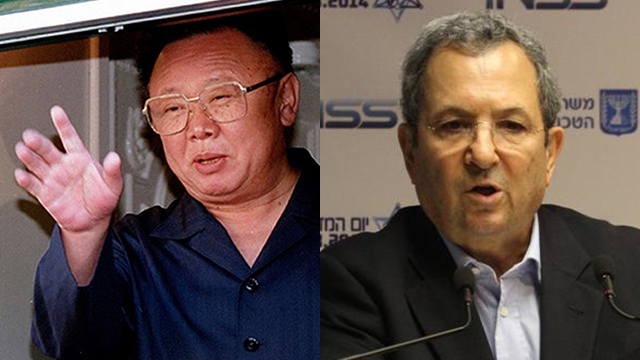 The Wall Street Journal quotes account by former North Korean diplomat, who said Pyongyang's ambassador to Sweden met with his Israeli counterpart in 1999, asking for cash money in return for stopping delivery of missiles to Israel's enemies.

North Korea reportedly made an offer Israel in 1999: $1 billion in cash in exchange for nixing their agreements to sell missiles to Iran and other enemies of Israel, according to a Wall Street Journal article published on Sunday quoting a former North Korean diplomat.

The offer was made by North Korea's ambassador to Sweden to his Israeli counterpart during a meeting at a cafe in Stockholm, in which the former diplomat, Thae Yong Ho, served as an interpreter.

Israel rejected the offer and instead offered food aid several days later, according to the diplomat, who recounted the meeting in his new memoir.

Tthen-North Korean leader Kim Jong Il and then-Israeli PM Ehud Barak (Photos: AP, Ido Erez)
Since the, North Korea has regularly provided weapons, ballistic missiles and nuclear technologies to Iran and Syria. According to an expert quoted by the Journal, Pyongyang has been selling conventional weapons and ballistic missiles to Iran since at least the early 1980s.

This account demonstrates how North Korea has tried to use the threat of spreading its nuclear weapons and knowhow in order to blackmail its enemies and obtain cash to fund its missile and nuclear programs.

Israeli officials declined to response to the account by Thae, who defected to South Korea in 2016. Israel's ambassador to Sweden at the time, Gideon Ben-Ami, told the Israel Public Broadcasting Corporation (IPBC) last week that he and then-North Korean ambassador Son Mu Sin had covert meetings from 1999 to 2002—three of them in 1999. Ben-Ami told the IPBC that the contact between the two began when the North Korean ambassador approached him at an event to congratulate him on the election of Ehud Barak as prime minister. Zvi Gabay, the former deputy director of the Asia Department in the Foreign Ministry, told the IPBC, "We told them we wanted to aid them with agriculture and maybe with money, but only in return for them stopping the sale of weapons to Syria and Iran, or in return for establishing (diplomatic) ties with us," but North Korea rejected the offer. Neither official made any mention of Pyongyang's demand of $1 billion. The Journal cited declassified US State Department documents that showed the US and North Korea were holding talks over Pyongyang's missile sales around the same time of Thae's account of the meeting with the Israeli ambassador.