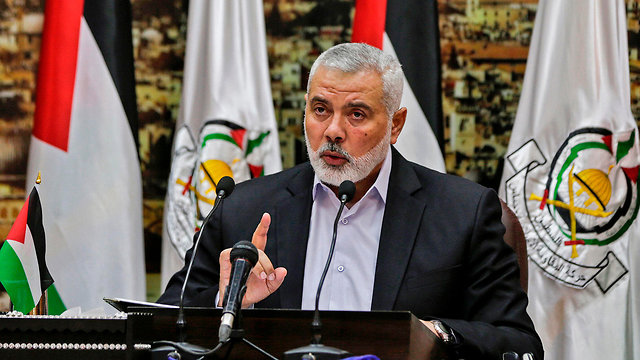 Ismail Haniyeh: More escalation unless siege on Gaza is lifted

Hours after a ceasefire between Hamas and Israel was announced, the leader of Hamas spoke at the funeral of two Palestinians killed in an IDF strike and vowed to continue the 'resistance' until the siege on Gaza is lifted; 'We will not give up on returning to all the land of Palestine'; Meanwhile, IAF aircraft attacks an incendiary balloons unit in the strip.

Hamas leader Ismail Haniyeh spoke on Sunday at the funeral of the two teenagers killed in yesterday's IDF airstrike in Gaza and warned Israel of further escalation unless the siege on the strip is lifted.

"Let the enemy end its aggression first and then the resistance will stop," Haniyeh said in a eulogy for Amir al-Namara, 15, and Loay Kheil, 16, who were killed when a half-constructed high rise they were in was hit by an Israeli missile launched after a barrage of rockets were launched from Gaza into Israel.

The IDF said that the buidling was being used by Hamas for military training.

"We are on the road to victory, the issue of Palestine, Jerusalem and Gaza is still on the top of our agenda. The solution to the situation in Gaza is to lift the siege. The Palestinian people do not believe in promises about projects. The people want to see real results that will bring an end to this siege.

"The weekly marches will continue until we’ve reached all of our goals, first and foremost: lifting the siege on Gaza. We’ll continue to march until the right of return is realized. We will not give up on returning to all the land of Palestine,” raged Haniyeh.

Haniyeh also said that the factions in the strip are those who had the last world when it came to ending the latest escalation.

“Our enemy, which aspires to impose equations of the rules of confrontation, has encountered resistance. We say to everyone that the marches that have put our issue on the map will only become more intense. The assassinations, carried out by your warplanes, will not happen again. These equations will not work again. Many elements were involved in mediating the ceasefire, but it was the word of the resistance that was the loudest,” he vented.
Incendiary balloon
X

Earlier in the day, several fires have broken out in the Gaza border region due to incendiary balloons being flown from the strip into Israel, only hours after a source told Ynet that the phenomenon of incendiary kites and balloons will stop gradually.

One of the fires ignited a hummus field in the Sdot Negev Regional Council. The fires have been extinguished.

In response the IDF attacked three Hamas units in northern Gaza responsible for launching of the incendiary devices into the Israeli territory.