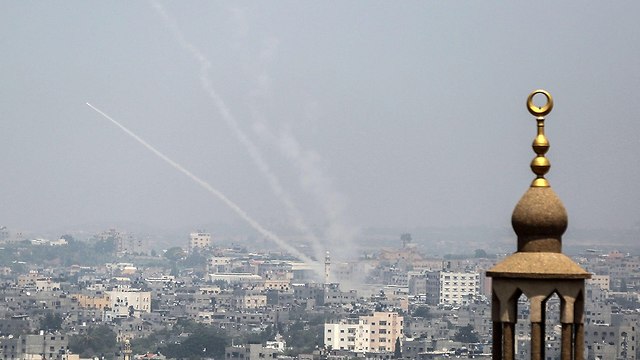 Proving itself to Iran, Hamas is deliberately playing with fire

Op-ed: Hamas reached a dead-end after Israel closed the Kerem Shalom border crossing. But the organization launched 200 rockets and bombs to impress Iran. An organization that wants a ceasefire, as Israel claims, does not do that. Nor does it send incendiary kites and balloons into Israeli communities.

Last Tuesday, as a punitive measure against incendiary balloons and kites terrorism, Israel announced that the Kerem Shalom border crossing is closing its doors.

Only humanitarian goods will be allowed into the Gaza Strip. In fact, Israel only allows the entry of fuel, food, fruit, flour, and other necessities to Gaza, and bans entry of electrical appliances, electronic equipment and construction supplies intended for international real estate developments in the strip.
Israel attack on Hamas battalion headquarters in Beit Lahiya    (צילום: דובר צה"ל)
X

Some people in Gaza criticized Hamas's handling of the situation. Critics say that in the final analysis, after a long, publicized and bloodstained campaign called the "Great March of Return", which has raised awareness on the Palestinian issue in Israel and world-wide, Hamas's actions only intensified the siege on Gaza. As a result, Palestinians suddenly finds themselves in a dead-end road. The "Great March of Return" demonstrations have since lost momentum and reached a point of exhaustion. The only people who confront the IDF are Hamas members wearing civilian clothes, and poor young Palestinians who receive pocket money for their participation.

The reconciliation with Fatah, in which Hamas's leader Yahya Sinwar put all his hopes, led to nothing. In addition, attempts to approach the Saudi axis were met with Riyadh's (the capital of Saudi Arabia) reluctance. Qatar, which was Gaza's regular ATM, is currently facing its own problems with Saudi Arabia and the Gulf states.

At the height of Hamas's "Great March of Return", the only country that gave something in exchange for keeping the peace, was Egypt, which has since opened the Rafah border crossing with Gaza. But this confectionary alone cannot last long.

According to sources in the Gaza Strip, the orgazination is in the midst of a severe financial crisis. The only country willing to give money to Hamas today is Iran, the sources added. For this reason, Hamas's leader Sinwar is interested in the Iranian axis's support. He needs Iranian cash. Not just for the civilian wing of the movement, but for the military one as well.

In this context, it should be remembered that Yahya Sinwar is, in essence, a member of the military wing of Hamas. He and Mohammed Deif, the commander of Hamas's military wing, both founded the division, and see eye to eye on its needs, as opposed to former Hamas leader Khaled Mashal.

Mashal came of age in the political wing abroad, not in Gaza's tunnels, as opposed to Ismail Haniyeh, Hamas's senior political leader who grew up in the strip. Haniyeh is much more attentive to the needs of Gaza and its leaders than Mashal.

But why is this important? Because in order to receive Iranian money, Hamas has to prove Iran that it deserves it. A public statement—which is in fact a commitment that any Israeli attack on the Gaza Strip will be met with bombs on Israeli land in the Gaza vicinity—is exactly what the Iranians are looking for.

In this delicate web of terror, Hamas is consciously walking on the edge. Hamas knows that its response to the current or next round (and there will be a next round, without a doubt), could lead to an all-inclusive confrontation, and it is ready to take this risk.

"This is an escalation that is inevitable for Hamas, given the dead-end that it reached", a source in the Gaza Strip said. Hamas is willing to take this risk because it knows that rocking the boat miraculously propels all parties involved to seek a long-term agreement that will ease the siege on Gaza. Hamas, therefore, has no other choice.

Senior security officials recently started briefing reporters on the fact that "Hamas wants a ceasefire." In the previous round, it was "Hamas begged Egypt for a ceasefire."

An organization that begs for a ceasefire will not fire 200 rockets and mortar bombs at the Gaza vicinity. An organization that wants to put an end to the fire does not make an effort to wake Gaza's residents in the middle of the night, while they sleep in shelters.

Besides, according the Israeli defense establishment, Hamas is uninterested in escalating conflicts in the Middle East.