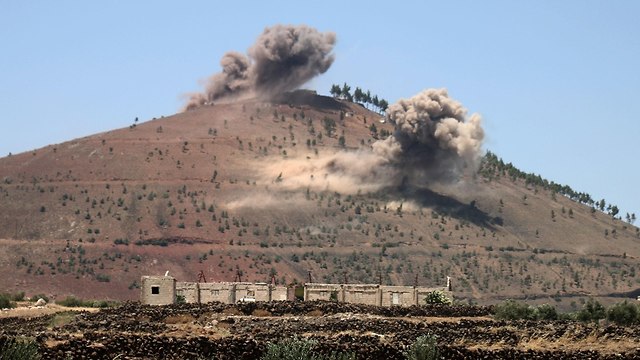 The hilltop, which had a major Syrian anti-aircraft radar base and is the highest ground in Daraa province, fell into rebel hands in October 2014; heavily bombed by Russian and Syrian forces in recent days as Assad recaptures swathes of land, Israel signals it will not impede offensive as long as it does not encroach on demilitarized zone.

The Syrian army and its allies have taken control of a strategic hill overlooking the Golan Heights as it expands an offensive to seize the remaining parts of the southwest from rebels, state television and rebels said on Monday. It said the army had taken control of al-Haara hill on the second day of an offensive to take back the last parts of southwest Syria in Quneitra province that are in rebel hands and are close to the border with Israel. The hilltop, which had a major anti-aircraft radar base that was part of elaborate Syrian army defences against Israel, and is the highest ground in Daraa province, fell into rebel hands in October 2014.

It has been heavily bombed by Russian and Syrian army raids in the past two days as the army has moved closer to the Israeli border after gaining control of most of Daraa province to the east in a push that began last June, according to rebels and a war monitor.

A Syrian army source quoted by state media said the army had made territorial gains in Quneitra province where it seized the town of Mashara, about 11 km (7 miles) from the Golan frontier.

(Photo: Reuters)
The violence is taking place a few kilometers away from the line marking the start of the United Nations Disengagement Observer Force zone, an area monitored by a UN force since 1974 in the wake of the Arab-Israeli War. Israel has threatened a "harsh response" to any attempt by Syrian forces to deploy in that zone. Israel does not want its enemies Iran and Hezbollah, both allies of Assad, who are well entrenched in that area to move forces near its border.

US President Donald Trump met Russian President Vladimir Putin on Monday in Helsinki, where Syria is expected to be high on the agenda. Ahead of the summit, Prime Minister Benjamin Netanyahu met Putin in Moscow and on Sunday spoke to Trump about Iran and Syria.

(Photo: Reuters)
The army offensive aims at completing its control of the strategic area known as the "Triangle of Death", which connects southern the Damascus countryside with Daraa and Quneitra provinces. The area is a bastion of Iranian-backed militias including the Hezbollah terror group, according to Western intelligence sources. Israel signalled it would not impede the Syrian army offensive in Quenitra as long as it steered away from the demilitarized zone, even as it struck Syrian army posts near the frontier and elsewhere in Syria where it suspects Iranian backed forces are stationed.