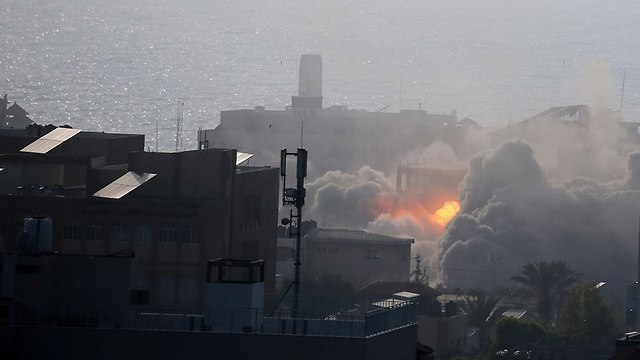 The Israel Air Force (IAF) attacked on Thursday afternoon a terror squad launching incendiary balloons next to a Hamas military post in the southern Gaza Strip, with Palestinians reporting a Hamas fighter had been killed and three others wounded.

Shortly after the Israeli jets attacked, two mortar shells were fired at IDF an force from southern Gaza near the border fence. No casualties were reported.

It was soon followed with four Code Red rocket alert sirens in the Eshkol Regional Council. Two mortar shells landed near a cowshed in Eshkol. The IDF responded with tank fire at a Hamas observation post.

The IDF released a statement shortly after the airstrike saying, “The IDF will continue to act with greater strength against terror activities that are being led by the Hamas terror movement and it views these activities seriously.”

Thursday's incident marks the first reported fatality among Palestinians launching incendiary devices. Israel has been firing near them until now.

Hamas said the man killed was a member of a "special force" tasked with monitoring the border fence at an observation post near Rafah, in the southern Gaza Strip. It did not elaborate or mention if he had participated in launching incendiary devices.

Local media reports in Gaza said the group was launching the devices at Israel when they were struck by a drone.

Fourteen fires broke out in the Gaza area as a result of incendiary balloons and kites on Thursday.

Gadi Yarkoni, the head of the Eshkol Regional Council, said that "the army has informed us the mortar fire on our territory was a response to an earlier strike on squads of incendiary balloon fliers, which joins other moves to thwart the threat. We see that the IDF and the political and defense establishment are keeping their promise to residents to put an end to the arsons. We back the IDF in any action necessary to ensure security, and we look forward to the quiet to return to the region."

On Wednesday, officials in the Defense Ministry said there that there were indications that Hamas's political and military wing intend to halt the launching of the incendiary balloons and kites that have been scorching woodlands and farmland across Israeli Gaza border communities over the past three months.

While on the surface Hamas continues to deny its intention to stop the fire terrorism, heavy pressure is being applied on the terror organization behind the scenes, both by Egypt and the UN envoy to the Middle East Nickolay Mladenov, who warn the incendiary balloons and kites will provoke Israel into launching an all-out war in Gaza.

According to defense establishment officials, "the next 48 hours will be crucial to curbing the phenomenon after which we know where this is headed."

When asked whether Israel intends to launch a war in Gaza amid the rising tensions caused by the incendiary balloons, one official replied that "decisions will be reached on a case-by-case basis. (Israel's) security policy cannot be based on media or political pressure, otherwise it will be the end," the official explained.

"We have to act wisely and powerfully. We aim to reach a positive outcome within 48 hours," the official concluded.