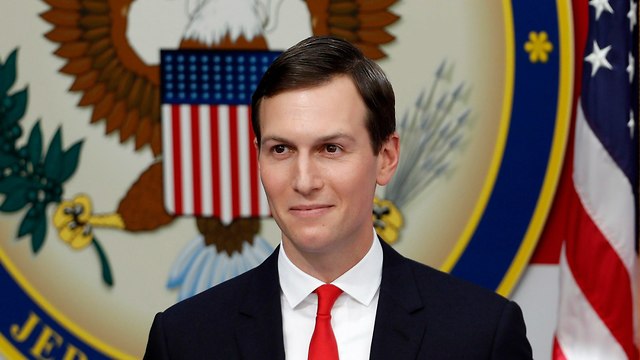 In joint Washington Post article, Trump's son-in-law and Mideast advisor, along with US Envoy to Israel David Friedman and special Mideast advisor Jason Greenblatt blame Hamas for immiserating Gaza's people with its 'morally bankrupt' war, warn its aggression will only lead to 'stricter constraints' and argue lack of change makes 'progress 'impossible'; Hamas: 'US officials spokesmen for the Israeli occupation.'

US President Donald Trump’s son-in-law and Middle East advisor Jared Kushner, US Ambassador to Israel David Friedman and special Mideast adviser Jason Greenblatt accused Hamas on Thursday of producing “misery for the people of Gaza”, saying that unless Hamas recognizes Israel, abides by previous agreements and renounces violence “there is no good option."

In a joint article written in the Washington Post entitled “Help is at hand for Palestinians. It’s all up to Hamas,” the three officials lay the blame for Gaza’s economic and humanitarian woes squarely at the Hamas terror group’s doorstep, arguing that it prevents any progress in the peace process by pursuing a “morally bankrupt, decades-old war that has long been lost.”

On Friday afternoon, Hamas published a response, accusing Greenblatt and Kushner of acting as a mouthpiece for Israel's "occupation."

“Greenblatt and Kushner have adopted the Israeli position. Its continued attacks against the Hamas organization reflects the arrogance of the US administration, which has turned its administration officials into spokesmen for the Israeli occupation only,” the Hamas statement said.

Jared Kushner (Photo: EPA)
Writing shortly after a six-day trip to the region, the US officials concluded that “one reality was painfully clear: The nightmare of Hamas’s leadership is continuing and needlessly prolonging the suffering of the Palestinian people in Gaza." The three urged Hamas to follow most countries in the Middle East in acknowledging that the existence of Israel is a permanent reality and argued that the group is fighting its war at the expense of the Palestinian people.

Jason Greenblatt during briefing near Gaza (Photo: COGAT)
Life for Palestinians, the trio argued, could swiftly and significantly improve if Hamas allowed it. “There are engaged, interested parties with resources who are ready to get to work. Yet without real change accompanied by reliable security, progress is impossible,” they argued. In the article, the three US diplomats also called on Hamas to cease provoking Israel with its rockets, incendiary kites, mortars and terror tunnels and other acts of aggression which they said have only immiserated the people of Gaza and held them captive.

“Hamas must immediately cease provoking or coordinating attacks on Israelis and Egyptians, and on infrastructure projects sponsored by donor nations and organizations,” they wrote in their damning indictment of Hamas.

David Friedman (Photo: Reuven Castro)
“Until governance changes or Hamas recognizes the state of Israel, abides by previous diplomatic agreements and renounces violence, there is no good option,” they added. In an apparent nod at Israel and Egypt’s tight blockade on the strip, which entails thorough checks and heavy restrictions on all goods entering the coastal enclave due to security concerns, the three diplomats indicate that Hamas’s tactics will only intensify the pressure on the people of Gaza.

“The cycle is clear: Rockets, mortars, terror tunnels, kite bombs and other weapons of aggression lead only to stricter constraints on the people of Gaza … The true victims of this terrible situation are the many Palestinians who are not rioting but whose futures are dimmed by Hamas’s radical approach,” they said.

In a rare spell of optimism in the bleak piece, the three noted what they described as “a clear divide between the bad actors looking to cause destruction, violence and human misery, and the responsible leaders trying to create a better and sustainable future for their citizens."

Moreover, the officials appeared willing to give Hamas the opportunity to change. “If Hamas demonstrates clear, peaceful intentions—not just by word but, more importantly, by deed—then all manner of new opportunities becomes possible,” they said.

“Rather than cynically attempting to exploit its barbaric holding of Israeli soldiers and citizens, Hamas must return them to their families,” they wrote in reference to slain fallen Lt. Hadar Goldin and Staff Sgt. Oron Shaul, and civilians Avera Mengistu and Hisham al-Sayed.