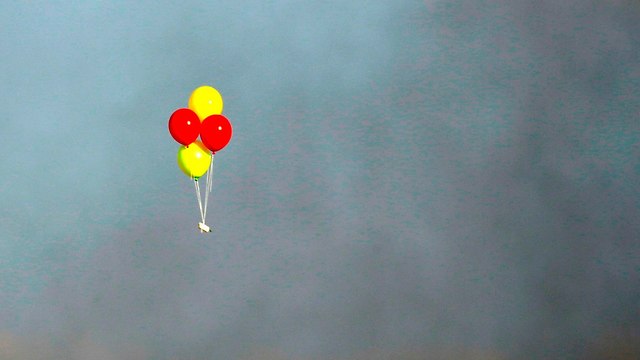 Condition of Palestinians flying incendiary balloons into south Israel not immediately clear after Israeli jets retaliate against launches that cause fires near Nahal Oz.

The strike was launched after the outbreak of a fire near the adjacent Israeli community of Nahal Oz caused by an incendiary balloon.

Incendiary balloon (Photo: AFP)
Earlier, two fires broke out near the Kibbutzim of Karmia and Zikim in the Hof Ashkelon Regional Council which were extinguished by firefighters within minutes. However, according to firefighting services, there was no indication that the flames erupted as a result of an incendiary balloon.

The incident takes place a day after an IDF aircraft struck a cell of terrorists launching incendiary balloons, also from northern Gaza into Israel. There were no casualties reported.

A similar incident occurred on Sunday when another IDF fighter jet attacked a cell launching flammable balloons from Gaza.

Public Security Minister Gilad Erdan commented on Tuesday to the balloon and kite terror that has terrorized Israeli communities and cities and which has incinerated thousands of acres of landscape.

“More than 120 days of fighting and more than 1,100 incidents involving fires have taken place,” Erdan said during a ceremony in Be’er Sheva marking the inauguration of a new southern firefighting commander. “Anyone who violates Israel’s sovereignty will pay the price.”

On Tuesday morning, Defense Minister Avigdor Lieberman announced the Kerem Shalom border crossing would be partially reopened from midday, following a decrease in the number of incendiary balloons being flown by Hamas from the Gaza Strip into Israel.

While gas and fuel will be allowed into the Gaza Strip in addition to food and medicine, some restrictions remain in the crossing: No other goods, including construction materials, will be allowed in, and there is also a ban on the export of goods from Gaza.