The downing of the Syrian plane on Tuesday 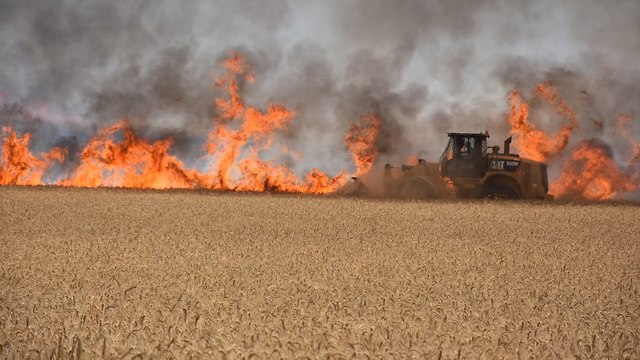 Op-ed: In recent days, the situation on Israel's northern and southern borders is escalating. While on the northern front Israel operates in a calm and rational manner, the handling of the southern front is guided by ideological and political considerations.

The pace of events in Israel's southern and northern borders has accelerated recently. Within a few days, rocket alert sirens were sounded both in the Gaza border area and on Israel's northern border.

According to Syrian reports, Israel attacked a missile factory located in the northwest region of Syria on Sunday. On Monday, two David's Sling interceptors were fired at Syrian missiles, and a Syrian fighter jet that infiltrated Israel's airspace was shot down on Tuesday.

In the south, an IDF officer was moderately wounded on Wednesday after being shot by a sniper from the Gaza Strip, leading the IDF to retaliate by attacking Hamas positions. Meanwhile, incendiary balloons keep landing in Israeli communities near the Gaza border, causing fires.

In this situation there are four aspects worth considering.

First, since Israel wants to avoid fighting two different military conflicts on two different fronts simultaneously, Israel must keep the peace on the southern border, for the north is much more challenging. Achieving peace on the southern border requires taking a step that Israel has yet to take: recognizing that the Gaza Strip can only be rehabilitated in cooperation with the government in Gaza, even if Hamas is still in charge. Reopening the Kerem Shalom border crossing is not the answer.

The number of trucks entering the Gaza Strip daily does not matter if Gaza residents have no purchasing power, unemployment rate stands at 60 percent or even higher, there is no electricity, no water, and the sewage system is overflowing.

A long-term quiet along the southern border can only be achieved by making a deal with the Gaza government, without any pretense. The price we have to pay is political and public, but it is a small and equal price.

Second, the downing of the Syrian plane was a successful operation, but it would have been better if it hadn't happened all. In contrast to the attacks on Iranian targets in Syria, downing a Syrian plane places Israel on one side, and Syria and Russia on the other. The incident's news coverage increases the chances of escalation.  It is worth remembering how Putin "went wild" when the Turks shot down a Russian plane that had crossed their border.

Third, nowadays, the reality of post-civil war Syria is starting to take shape. Israel insists, and rightly so, on returning to the 1974 Disengagement Agreement. According to this agreement, a designated demilitarized strip will be established on the Syrian side, into which military forces will not be allowed entry.

Establishing this buffer zone may be a sufficient solution for preventing friction between the ground forces of Israel and Syria, but the buffer zone is too narrow to prevent an air strike—in the southern region of the Golan Heights the buffer zone is only hundreds of meters wide.

We should try to reach an agreement with the Russians on a wider aerial demilitarized area in order to prevent an incident like this week's plane downing from repeating itself. The relatively old Syrian plane apparently did not intend to attack Israel, but the absence of a security margin could mean recurring similar events that will only hurt both sides.

Fourth, the Israeli government conducts an exemplary policy vis-a-vis Syria: the proper integration of pragmatic and smart political action with firm military responses. Why is the policy so balanced on this front, and completely wrong on the other?

The downing of the Syrian Sukhoi plane
The answer is clear: for the past 13 years, we have been locked in a propaganda war with Gaza. We have repeatedly declared that Hamas is a terrorist organization and therefore, we will not negotiate with it. The prime minister can hardly stray from this line, since it carries an internal political price—the price of cutting ties with his most important political base.

On the northern front, we operate without any ideological, public, or political commitment. Instead, we operate according to our interests alone, and rightly so.

This does not mean that we have no values, on the contrary. On the northern front, we proved our ability to take care of despondent civilians from the other side, beyond any political or military consideration.

But every decision is based on cold and realistic analysis of the situation. It seems that Putin has proven more than once that those who conduct policies based on cold interests accomplish more.

We should learn from the way Israel operates on the Syrian front, and implement this on other fronts as well. Not only with Gaza and not only in matters of foreign affairs and security.