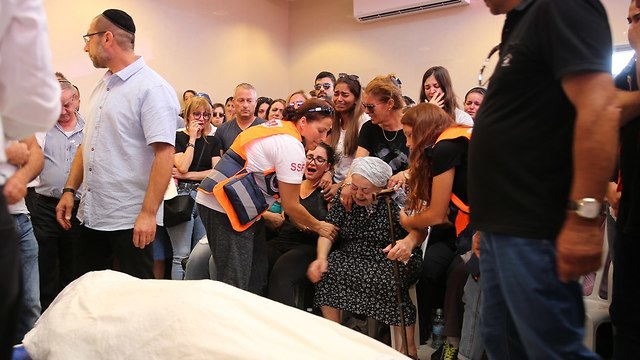 Family members weep as they recite the mourning prayer of kaddish for the 31-year-old father of two, who was stabbed in a terror attack in Adam on Thursday evening; 'Our hearts break at the sound of your little son calling "daddy, daddy,”’ says father-in-law; 'Thank you for who you were for us.'

Hundreds of family members and friends attended the funeral on Friday afternoon of 31-year-old Yotam Ovadia, who was stabbed to death on Thursday evening by a Palestinian terrorist in the settlement of Adam. “Our hearts break at the sound of your little son calling ‘daddy, daddy.' We want to ask for your forgiveness if we did (wrong by you—ed.) We all wanted only good for you. Thank you for what you were for your beloved children and for you beloved wife, Tal,” said Ovadia’s father-in-law, Yehuda Adari at the funeral that got underway at 1pm.
Yotam Ovadia's funeral    (צילום: אלכס גמבורג , ענבר טויזר)
X

Ovadia was killed by 17-year-old Mohammad Tareq Yousef from Kobar in a stabbing attack on Thursday night while he was on his way to his parents’ house to collect items he bought for a romantic dinner he had prepared to surprise his wife to celebrate the Jewish holiday of Tu B’Av—similar to Valentine's Day.

He also stabbed Ovadia several times, who succumbed to his wounds overnight while being treated in the Hadassah Medical Center in Jerusalem’s Mount Scopus.

“We will pray for comfort from the heavens to help her through this difficult period … We will keep you in our hearts for all eternity,” he said before members of the family recited the traditional solemn mourning prayer, Kaddish at Givat Shaul Cemetery in Jerusalem in the presence of religious dignitaries and politicians, including Minister of Tourism Yariv Levin and Jerusalem Mayor Nir Barkat.

Ovadia’s uncle also eulogized his nephew, who is survived by his wife and two sons—Harel aged two and ten months, and Itay aged seven month.

“I will not forget all the Shabbats with you, you with your shy look with a smile as you looked from the side. Why have you been taken from us?,” he asked. “You were murdered by a lowlife. You were a source of pride for your parents, an exemplary family man, modest, and kind. Many were captivated by your charm. You always knew how to make everyone smile and to be happy. Thank you for who you were for us. We love and miss you.”

Yotam and Tal Ovadia with their two children

Minister Levin spoke at the funeral, telling listeners that the tragedy that had befallen the family was “incomprehensible.”

“We are standing before you, Yotam, in pain and suffering and a whole nation is mourning together with us. Yotam, a family man, a devoted husband and father,” Levin said. “You life was taken from us yesterday for one reason: because you are Jewish.

“I was told that you were on your way to prepare for your wife, Tal, a meal for Tu B’Av. This beautiful act attests to your character and to your love that prevailed in your home,” Levin continued in his eulogy.

“I have no words in my mouth to console in light of the loss but our enemies should know: our spirit will not be broken.”

“In the name of the people of Israel, I would like to send my condolences to the family of Yotam Ovadia, may his memory be blessed, who was murdered in a terror attack last night in the Adam community,” Netanyahu wrote on Facebook.

“Yotam left behind his wife, Tal, and his two children, Harel and Itay. We are all praying for the health of the other people wounded in the attack. May Yotam’s memory be blessed and ingrained in our hearts forever.”