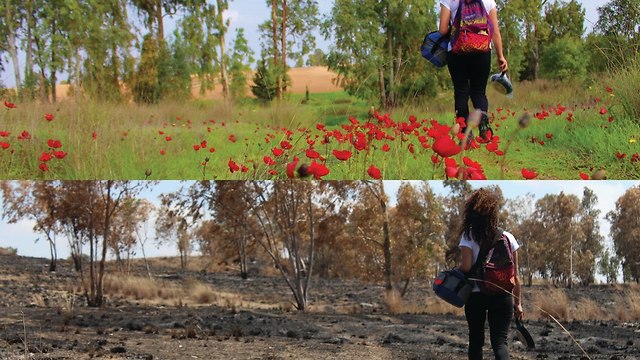 Exhibition at UN headquarters in New York presents ambassadors and diplomats from all over the world before and after photos demonstrating the destruction caused by Hamas's ecological terrorism.

Israel set up an exhibition at the UN headquarters in New York this week to show the world the damages caused by the fires in Israeli communities near the Gaza border from the incendiary balloons and kites being flown by Palestinians from the strip.

Among the exhibits were photos of fields and agricultural lands before and after the fires, as well as additional photographs demonstrating the damages caused to fauna and flora in the area.

(Photo: Matanel Busheri)
Curated by photographer Udi Israel, the exhibition put an emphasis on Hamas's ecological terrorism and was opened to ambassadors and diplomats from around the world.

(Photo: Moshe Filberg)
"The destructive fire terrorism not only threatens the lives of Israeli citizens, but destroys the entire ecological system in the south and causes irrevocable environmental damage," said Israel's Ambassador to the UN Danny Danon. "Hamas's cruelty and cynicism, turning playthings into deadly weapons, knows no bounds."

(Photo: Michael Zeruya )
"Just last week, we saw how an incendiary balloon like this endangers a kindergarten. Israel will not tolerate any attacks like that and will respond with force until it eradicates the fire terrorism completely," Danon added.

The Israeli ambassador submitted an official complaint three weeks ago to the Deputy Secretary-General Amina J. Mohammed, who deals with environmental issues, and called to condemn Hamas's ecological terrorism, pointing to the great damage caused to tens of thousands of acres of agricultural fields.

"For over 100 days, Hamas has been using burning kites and other aerial measures to set some 700 fires, which burned over 30,000 dunams (some 7,400 acres) of Israeli agricultural land. This is the new face of Hamas terrorism," Danon wrote in his letter to the deputy secretary-general.