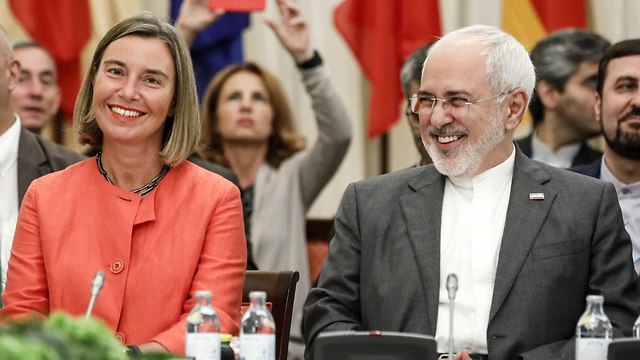 The European Union on Monday said it deeply regretted the re-imposition of sanctions by the United States on Iran, adding it and other signatories would work on keeping financial channels with Iran open.

“The remaining parties to the JCPOA have committed to work on, inter alia, the preservation and maintenance of effective financial channels with Iran, and the continuation of Iran’s export of oil and gas,” the European Union’s foreign service said in a statement, referring to the acromym for the nuclear deal struck with Iran in 2015.

"On these, as on other topics, our work continues, including with third countries interested in supporting the JCPOA and maintaining economic relations with Iran. These efforts will be intensified and reviewed at Ministerial level in the coming weeks," the EU added.

"The JCPOA is working and delivering on its goal, namely to ensure that the Iranian program remains exclusively peaceful, as confirmed by the International Atomic Energy Agency (IAEA) in 11 consecutive reports," the statement went on to say. "It is a key element of the global nuclear non-proliferation architecture, crucial for the security of Europe, the region, and the entire world. We expect Iran to continue to fully implement all its nuclear commitments under the JCPOA."

The EU foreign ministers went on to explain that "The lifting of nuclear-related sanctions is an essential part of the deal—it aims at having a positive impact not only on trade and economic relations with Iran, but most importantly on the lives of the Iranian people."

The European Union also said it is "determined to protect European economic operators engaged in legitimate business with Iran, in accordance with EU law and with UN Security Council resolution 2231. This is why the European Union’s updated Blocking Statute enters into force on 7 August to protect EU companies doing legitimate business with Iran from the impact of US extra-territorial sanctions.

A first set of US sanctions that had been eased by the Obama administration under the terms of the landmark 2015 Iran nuclear deal will take effect again on Monday. Those sanctions target Iran's automotive sector as well as gold and other metals.

The US also has banned imports of Iranian products such as carpets and pistachios and revoked licenses that allowed Iran to purchase US and European aircraft. Iran acquired five new European commercial planes on Sunday before the sales were cut off.

The last and most significant sanctions—those on Iran's oil sector and central bank—will be restored on Nov. 4. Iranian oil sales are a crucial source of hard currency.

US Secretary of State Mike Pompeo said Sunday Washington intends to fully enforce the sanctions on orders from US President Donald Trump.

Pompeo, speaking with reporters returning with him from an Asian trip, said the White House would detail implementation of the measures on Monday morning.

"It's an important part of our efforts to push back against Iranian malign activity," he said. "The United States is going to enforce these sanctions."

Despite opposition from European allies, Trump in May pulled the United States out of a 2015 deal between world powers and Tehran under which international sanctions were lifted in return for curbs on Iran's nuclear program.

Trump had denounced the deal reached under his White House predecessor, Barack Obama, as one-sided in Iran's favor.

Starting this week, Washington will reimpose sanctions on Iran's purchases of US dollars, its trade in gold and precious metals, and its dealings with metals, coal and industrial-related software.

The United States has told other countries they must halt imports of Iranian oil starting in early November or face US financial measures.