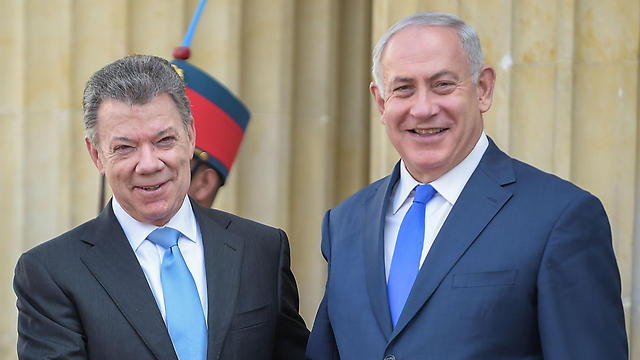 Colombia's new government is reviewing a decision made by former President Juan Manuel Santos to recognize Palestine as a 'free, independent and sovereign state' just days before leaving office.

BOGOTA - Colombia’s new government said it would review former President Juan Manuel Santos’ recognition of Palestine after the previously unreleased decision was made public on Wednesday.

President Ivan Duque took office on Tuesday and was informed a few days ago of Santos’ decision, which was detailed in an August 3 letter to the Palestinian representative in Colombia, the foreign ministry said.

“Given possible omissions that could come to light about the way in which this decision was taken by the outgoing president, the government will cautiously examine its implications and will act according to international law,” new Foreign Minister Carlos Holmes said in a statement.

Santos decided to recognize Palestine as a “free, independent and sovereign state,” according to the letter, which was circulated to reporters by the foreign ministry.

“Just as the Palestinian people have a right to constitute an independent state, Israel has a right to live in peace alongside its neighbors,” the letter said.

The Israeli embassy in Bogota said it was surprised and disappointed.

“We ask the Colombian government to reverse the decision made by the previous administration in its last days, which contravenes the close relations, extensive cooperation in vital areas and interests of both countries,” it said in a statement posted to its Twitter account.

The decision came to light during a visit to Colombia by United States ambassador to the United Nations Nikki Haley. She attended Duque’s inauguration on Tuesday and on Wednesday visited Venezuelan migrants in the northern border city of Cucuta.

The United States, a close ally of Israel, was getting more information about the situation and had no immediate comment, the US mission to the United Nations said.

“We thank the Colombian government for this decision and we are sure that it will contribute significantly to generating the necessary conditions in the search for peace in the Middle East,” the Palestine representative said in a statement on Wednesday.

Palestine has been recognized as a sovereign state by the UN General Assembly, the International Criminal Court and at least 136 countries. Prior to Santos' decision, Colombia was the only Latin American nation that did not recognize Palestine.

The Palestinians seek to create a state in Gaza, the West Bank and east Jerusalem, lands that Israel captured in the 1967 Six-Day War.

Colombia abstained in December from a vote by the 193-member UN General Assembly on a resolution calling for the United States to drop its recognition of Jerusalem as Israel’s capital. US President Donald Trump had threatened to cut off financial aid to countries that voted in favor.