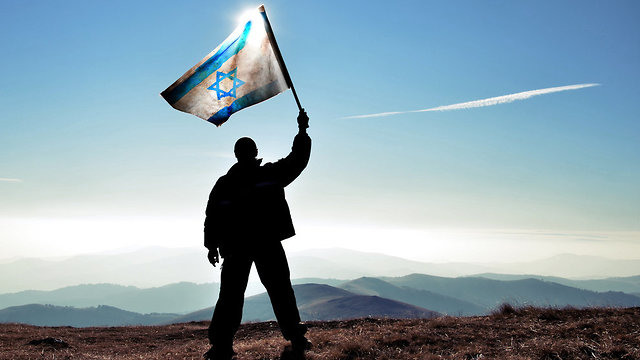 To those opposing the Nation-State Law

Op-ed: The needless uproar over this justified law illustrates that some people in society would sleepwalk into a future devoid of any national identity if they could. The Nation-State Law poses no threat to the rights of minorities, and the entire controversy, which has been blown out of all proportion, serves, more than anyone else, Israel's most vehement critics.

The uproar over the Nation-State law is outrageous and is symptomatic of a country that is sleepwalking into a future bereft of any national identity. According to those who wish to see it overturned, the law allegedly encroaches on, or caters for the infringement of, the rights of minorities, it engenders friction and divisions and it is particularly offensive—almost ungrateful—to the Druze population whose sons serve loyally in the Israel Defense Forces.

The reports in the media and the thousands of protesters in the streets would have us believe that Israel’s “extremist right-wing government” is embarking on a path reminiscent of 1930s Germany. These are abhorrent not only because of their odious comparison, but because they contain not a shred of truth. No doubt, a substantial number of these people are constantly seeking to join the bandwagon against the current government and slam anything that it does.

Doubtless too, they have not actually read the text of the Nation-State Law. A cursory glance at some of the key clauses should suffice to silence what is essentially a group of people who, if Israel’s existence were to be re-declared today, would opt for the abolition of any references whatsoever to a Jewish state from the country’s fundamental tenets.

“The land of Israel is the historical homeland of the Jewish people, in which the State of Israel was established,” so reads the opening of the law. The opponents are simply aghast at the notion that a sovereign Jewish state would dare to enshrine in law that it is a Jewish state. “The State of Israel is the national home of the Jewish people, in which it fulfills its natural, cultural, religious and historical right to self-determination,” the law continues. Critics are outraged that this clause fails to mention specifically that the state is also the home of Christians, of Druze, of Muslims and every other religion and that it fulfills their respective natural, cultural, religious and historical right to self-determination. It certainly is that to those who live in Israel and this notion is enshrined in other laws which will be discussed below. However, the very raison detre for Israel’s existence was to fulfil the national aspirations of the Jewish people. While that was never to be at the expense of other minorities and Israel’s establishment, it was also never about creating anything other than a Jewish state which also protects its minorities.

“The right to exercise national self-determination in the State of Israel is unique to the Jewish people.” This is perhaps one of the most controversial clauses, yet such controversy is without cause. The fear-mongering interpretation is that this law infringes on rights of other minorities to self-determination; but the essential word in the clause is “unique”, rather than “restricted” or “limited.”

Protest against Nation-State Law in Rabin Square (Photo: Tal Shahar)
Other minorities within the state certainly have the right to exercise self-determination, but there is a unique aspect as it pertains to the Jewish people. For a reason which is beyond baffling, the law’s opponents are loath to acknowledge this and seem hellbent on ensuring that it is not enshrined in law. Yet ironically, it is many of those same opponents who are the first to criticize the current government for pursuing what they argue are land policies that are dragging Israel into a self-defeating future in which the country will sooner or later lose its Jewish demographic majority. Is this not a racist idea, too? That Jews should actually dare to strive to ensure that they remain a majority? Why should they be entitled to an automatic majority? What gives them the right? Why should Palestinian refugees and their descendants not be afforded the right to return too? And yet, the law’s detractors know full well why. They, too, wish to preserve a Jewish future in the Jewish state, but openly admitting in this context of the Nation-state Law has become anathema to the extreme liberal dogma to which they subscribe. Nobody, and nothing in the current law, should raise fears among anyone regarding individual rights, especially not the Druze population, who are a cherished minority and whose reaction has been entirely blown out of proportion. The encouragement they have been given by some on the Zionist Left is shameful. This is not and never has been a Druze state. Nor is it a Christian or Muslim one. It is the nation-state of the Jewish people—a Jewish state which safeguards the rights of its minorities as equals. The following clause in the law demonstrates that Israel does ensure religious tolerance and respect. “The Sabbath and the festivals of Israel are the established days of rest in the state; Non-Jews have a right to maintain days of rest on their Sabbaths and festivals; Details of this issue will be determined by law.” Then there is the section of the law that addresses the use of Arabic in the public domain. By changing it from an official language to one of “special status”, the reaction that it has evoked would have any stranger believe that Netanyahu has just ordered a state-sanctioned assault against Arabic speakers. But the truth lies in the text itself: A. The state’s language is Hebrew.

B. The Arabic language has a special status in the state; Regulating the use of Arabic in state institutions or by them will be set in law.

C. This clause does not harm the status given to the Arabic language before this law came into effect.

Once again, just as many argue that Israel, as a sovereign state, has the right to determine its own borders, its own capital and own destiny, so too does it have the right to determine its official language. Arabic does not have to be elevated to be more than a special-status language. Due to traditions and history of the country, recognizing it as a special language seems appropriate. It is, however, deserving of being awarded official language status in Israel no more than it is in the UK or any other European country. Nobody is calling for the persecution of Arabic speakers and here, point C in the section above should be kept in mind. There are, throughout the law, multiple references to the Jewish people and heritage. Practically every clause contains an emphasis on the promotion of Jewish nationality, religion, heritage, culture, history and language. Every one of them, which is already practiced de facto, could be labelled as racist by the law’s opponents. Yet if that is true, the very essence of Israel’s foundation should be cast onto the trash heap of history and mourned as a racist epoch in the Jewish journey. On Saturday night, dozens waved Palestinian flags at a mass demonstration against the law in Rabin Square. Those people are against Israel’s existence in any form. The more moderate Israelis and Jews who attended the rally cannot, of course, be placed in the same category, but their actions and excessive criticism does provide ammunition for Israel’s staunchest enemies, both within the country and abroad. If Israel were re-declared today, this group would eschew the right of return as another “racist” stain on Israel’s blue and white flag of Zionism. This group would undoubtedly rally in Rabin Square alongside Druze and other minorities and call for the erasing of any mention of “the Jewish spirit is yearning deep in the heart” in the national anthem. The verse “To be a free people in our land” would be subject to constant critical analysis of what “people” and what is meant by “our land.”

While this can be dismissed as conjecture, we are seeing much of it take place before our very eyes. Even people whose stated love for Israel are now allowing themselves to be misled by a fashionably extremist progressive ideology, resulting in their taking for granted the precious gift of a Jewish state that was bestowed upon us by our forefathers and paid for in blood. Sadly, questions can still be heard over whether Israel’s national anthem is inherently racist What the critics fail to understand is that rabid Israel-haters such as the UK’s Jeremy Corbyn would propound identical arguments designed to chip away at Israel’s legitimacy and brand it as a racist state. These are the very same assertions as those being articulated by Israelis opposing the Nation-State Law. Perhaps this is uncomfortable for some to acknowledge, but it is the truth. After all, with this in mind, how then can Corbyn be accused of being an anti-Semite for refusing to adopt the clause in the international working definition of anti-Semitism which reads thus: “Denying the Jewish people their right to self-determination, e.g., by claiming that the existence of a State of Israel is a racist endeavor.”? The Nation-State Law is no more than a codified expression of Zionism and its fundamental principles. If that is racist, Jeremy Corbyn and his cronies are either not anti-semites or the official definition of anti-Semitism is erroneous and Corbyn is right to reject it. Perhaps worse, many in Israel are unwittingly leaving themselves open to the accusation by Israel's enemies that they too are anti-Semitic by their own standards. The onus falls on the Nation-State’s critics to choose. The fact is that Israel has anchored full civil rights in its declaration of independence, in the law of Acquisition of Israeli Nationality, in the Protection of Holy Place Law, in Basic Law- Human Dignity and Liberty. As is a common trend in modern Jewish history, too many Jews in Israel are bending over backward to demonstrate their own so-called “egalitarian values” at the expense of those which gave rise to a flourishing free Jewish state. Questioning Prime Minister Netanyahu’s motive is one thing and asking why now is a legitimate political debate, but claiming that the Nation-State Law is a toxic and racist concoction by the Right places you not in the Zionist Union camp, but firmly in the Corbyn camp. It makes you an easy tool for a rebuttal by people who are vehemently pedalling an anti-Semitic mantra under the guise of anti-Zionism.