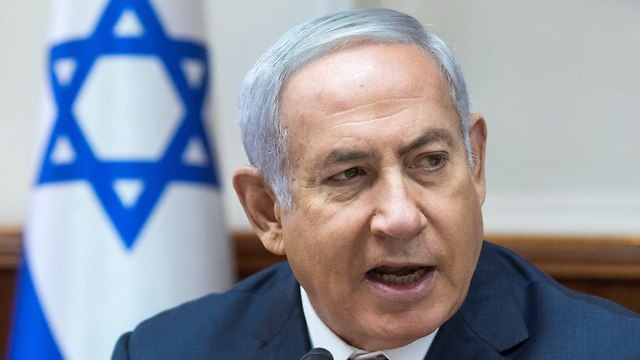 Due to the threats expected in the coming decade, PM intends to increase the secuirty budget by billions, from 0.2% to 0.3% of the GNP; 'We invest more in security in order to defend our achievements.'

Prime Minister Benjamin Netanyahu presented a document titled "Security model 2030" at the Security Cabinet meeting on Wednesday. The document, which outlines the new budgetary additions to the country's security budget, has been formulated by Netanyahu over the past couple of years.

The document was presented at the first Security Cabinet meeitng in a series of meetings on the subject. The prime minister presented the anticipated threats for the coming decade, the building of the necessary force and the principles for operation of the force.

The full document is classified and will soon be presented in full by the prime minister to the Knesset Subcommittee on Intelligence Affairs and Secret Services, the IDF General Staff Forum, the Mossad and the ISA. The non-classified part of the document pertains to the budgetary implications which will soon be submitted for Cabinet approval.

According to a the document, due to the anticipated threats over the coming decade, the prime minister intends to increase the security budget by 0.2-0.3% of GNP as the IDF becomes more efficient.

The budgetary increase is designed for expenditure on all security bodies (IDF, ISA, Mossad and others), which currently stands at approximately 6% of GNP.

The goal is an average annual growth of 3-4% and average expenditure of approximately 6% of GNP for all security needs, and when the GNP reaches $0.5 trillion, the required rate for overall expenditure on security will be reexamined.

"Due to our small area, the population concentration and the numerous threats around us, Israel will always have security needs that are much greater than any other state of similar size.Today the Israeli economy is strong enough to allow for this supplement. In any case the increase will be enacted while maintaining a responsible budgetary framework," the prime minister said.

"In the last 20 years we have cultivated a free economy in order to serve national needs, especially security. Against the accumulated threats we are at a turning point. Today we are called upon to invest more in security in order to defend our achievements and ensure continued economic growth," Netanyahu added.

"The combination of our security and economic strengths will increase Israel's status as an asset in the eyes of other countries and thereby increase our diplomatic strength," the prime minister concluded.

The budgetary supplement will be allocated to a series of issues including the strengthening of offensive capabilities, major power-level cyber capabilities, upgrading anti-missile defense, continued protective measures on the home front, and the completion of security fences.