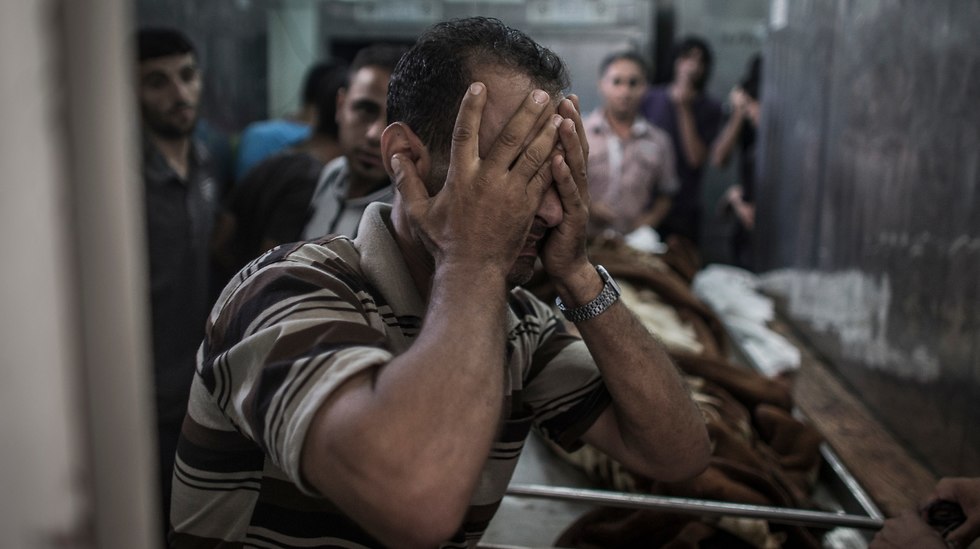 Unwilling and unable to seek justice for Gazans

Op-ed: The Military Advocate General has decided to close the investigation into Rafah's Black Friday. And the heart of the problem is this: No matter how high the death toll, the MAG will find a way to whitewash the incidents, as this is his real function.

Chief Military Advocate General Maj. Gen. Sharon Afek’s decision to close the investigation into Rafah's Black Friday—which took place on August 1, 2014—and several other incidents that took place during the fighting in Gaza that summer, is as outrageous as it is predictable.

Outrageous because it sweeps under the rug the wholesale killing of Palestinian civilians, which, according to Maj. Gen. Afek, was proportionate, non-criminal and non-negligent. A mass killing that no one—from the prime minister to the commanders on the ground—will be held accountable for. Over the course of that Friday, soldiers killed 128 Palestinians. Most of them—93—did not participate in the fighting. Twenty-four of the dead were women, and 35 were minors.

Yet the decision is also predictable because closing cases, whitewashing crimes and burying facts—and with them any remnant of shame—are what the Military Advocate General’s Corps does best.

So, with respect to the mass killings in Rafah, the “MAG found that the open fire policy during combat…. was consistent with the provisions of Israeli law and the rules of international law.”

On the killing of five members of the a-Zwiedi family, including Ruayah, 6, and Nagham, 2, in Beit Hanun on July 19, 2014, the MAG ordered the “inquiry into the incident closed without a criminal investigation.”

On the killing of nine women from the al-Qassas and Siyam families, including the girls Israa and Nasmah, 10, Arwa, 5, Yasmin, 7, Lamyaa, 12, and Samar, 3, in Gaza City on July 21, 2014—none of whom had participated in the fighting—the MAG ordered “the inquiry into the incident closed without a criminal investigation.”

The killing of more than 30 non-participants in Khan Yunis on July 29, 2014, was done, according to the MAG, in a manner “consistent with the provisions of Israeli law and the rules of international law.”

The killing of nine non-participants at a beach café on July 9, 2014, was carried out in a manner “consistent with the provisions of…”

The killing of 17 non-participants in al-Bureij on July 29, 2014, was carried out in a manner “consistent with…” and the list goes on.

The MAG Corps may hide behind baseless legal interpretation to cover up the killings, but the facts tell a different story and expose the MAG’s cynical take not only on the provisions of the law, but also on fundamental moral principles and common sense.

The burning question is: how many times can one rely on “accurate intel” that turns out to be partial or wrong, and how many people have to be killed because of this reliance before the MAG draws the obvious conclusion? What does it take to realize that it is impossible to argue convincingly that what happened was “unexpected” when civilians were repeatedly disproportionately killed over the summer in nearly identical attacks?

The killing of 2,202 Palestinians—hundreds of whom were members of dozens of families who were wiped off inside their own homes—at least 1,391 dead who did not take part in the fighting—the deadliest and most destructive assault on Palestinians by Israel since 1967—was branded legal and proportionate before the first bullet was fired. And with the MAG’s generous help, even the so called “aberrations” that did get investigated were ruled reasonable. Q.E.D. Add to that the fact that the person occupying the position of MAG is in an inherent conflict of interest with respect to the investigations he is charged with opening and running. When the incidents the MAG is now supposedly investigating took place during Operation Protective Edge, his predecessor, occupying the same office, gave the military legal counsel and approved its conduct. Does anyone really expect the MAG to order these incidents investigated?

Palestinian man cries as he holds the dead body of his young brother shortly after he got killed by an Israeli naval bombardment in the port of Gaza City (Photo: EPA)
The heart of the problem is this: No matter how high the death toll or how random the circumstances in which these people were killed, the MAG will find a way to whitewash the incidents, as this is his real function. The IDF runs an elaborate, professional system ostensibly charged with investigating the truth and seeing justice done. In truth, however, its success is measured by its ability to shield those who shot and killed without justification rather than protect their victims.

Why does the military put so much effort into whitewashing? One of the main reasons for this is the desire to ward off international investigations against Israelis who are responsible for the killings. Israel produces this intricate morality play to show the outside world it is willing and able to investigate itself.

Not buying it? Take it from the leadership itself. When former defense minister Moshe Ya’alon appointed the current MAG, he stated explicitly the incoming officer’s experience would help protect the IDF from lawsuits around the world. This year, a senior official explained the importance of the “general staff special investigation mechanism”—put in place to facilitate the whitewashing of incidents that took place during Operation Protective Edge and employed again in the context of killings of unarmed protestors during the "March of Return" protests—telling Israeli news website Walla: “The important thing is that the mechanism protects IDF soldiers.”

Regardless of just how effective this whitewashing mechanism could be in warding off international investigations, the focus put on the utilitarian aspect of these investigations disregards the real reason accountability is necessary—preventing similar, or worse, crimes in future. This disregard shows that for Israel, any Palestinian is fair game and that the stage has already been set for the next assault. Amit Gilutz is the spokesperson for B’Tselem.