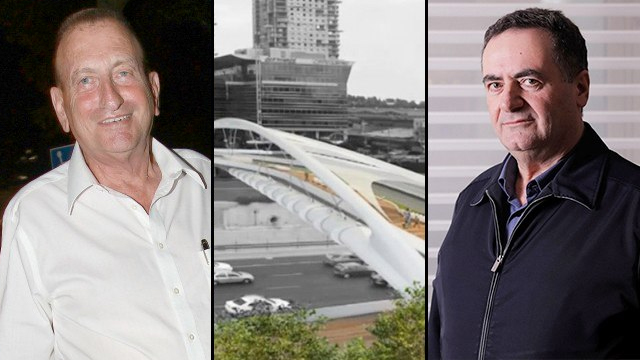 Minister Katz comes under fire over decision not to carry out construction work on a new bridge over the Ayalon Highway during the weekend and instead pushing to carry it out at nighttime; Mayor Huldai: 'This is a purely political decision.'

Tel Aviv Mayor Ron Huldai on Wednesday criticized Transportation Minister Yisrael Katz's decision not to carry out construction work on a new bridge over the Ayalon Highway during the weekend, saying the works cannot be done at night.

According to Huldai, Ayalon Highways Co. has already examined all possibilities and reached the conclusion that "works of this type would not only stop traffic on Ayalon Highway, but also stop Israel Railways trains, and would in fact lead to transportational catastrophe."

The Tel Aviv mayor explained that the deployment of the cranes alone requires more time than the three hours allocated for the nighttime works (2am-5am).

"Since this is a decision made in a professional manner and approved by the Israel Police, the Transportation Ministry and Welfare and Labor Minister Haim Katz, there's no other conclusion to draw but that Minister (Yisrael) Katz's decision is purely political and its results will cause immense damage to the citizens of the state in general and the residents of Tel Aviv-Jaffa in particular," Huldai charged.

He threatened to petition to the High Court of Justice against the decision.

Earlier, a Transportation Ministry official said the decision was "clearly the result of capitulation to pressure from the Haredim." "We feel this pressure every time we want to do works on Shabbat," the official said. "The public needs to decide what's more important: to observe the Shabbat, or (to avoid) the inconvenience caused by the works. Either way these works would've hurt the public, so they were planned for Shabbat to reduce the damage."

"It needs to be resolved once and for all," the Transportation Ministry official added.

The planned Yehudit Bridge
Meanwhile, another transportation source said that as a result of Katz's decision, "the works will take longer and the price the public will pay as a result of the increased traffic congestion will be significantly higher. Therefore, it'll also be more expensive for the economy." According to the original plan, the construction of the new pedestrian and cycling Yehudit Bridge, which will connect Yigal Alon Street and the Montefiore neighborhood, were scheduled to take place over six weekends starting August 31. This would necessitate the closure of parts of the Ayalon Highway in the Tel Aviv area between 6pm Friday and 6pm Saturday, because of the dangerous nature of the work, which includes the placement of six massive steel beams, 55 meters long, weighing more than 1,000 tons.

The planned Yehudit Bridge (Photo: Hen Architects)
The United Torah Judaism Party came out against the planned weekend construction work, with MK Uri Maklev explaining that "the Shabbat is not a solution—not for construction work nor for maintenance work." Shas MK Yinon Azulay wrote to Prime Minister Benjamin Netanyahu on Tuesday, asking that he intervenes and stops the work. He pointed out that the Hebrew month of Elul, a month of heavenly mercy and forgiveness, is a terrible time to schedule such an open and ongoing Shabbat desecration.

Culture Minister Miri Regev defended Katz's decision in an interview with Ynet on Wednesday, arguing that "If the bridge can be built

during the week, why should we desecrate the Shabbat? After all, the Shabbat, beyond the religious significance it has for religious citizens, it is a day off for workers. So, there is no reason to continue work on Shabbat if it is possible to construct the bridge from 2am to 5am. So the work will be completed in a month, not a fortnight. If it is possible to reach an understanding, I do not see this as a problem."

"The transportation minister heard the variety of opinions regarding this matter, and made the right decision to carry out the work in the late night hours. I think this is a correct and appropriate decision," she added.

Zionist Union leader Avi Gabbay chose to blame Prime Minister Benjamin Netanyahu for the decision. "Netanyahu doesn't care if we're stuck in traffic. Only someone who doesn't care about the public can capitulate that fast. We got used to waiting endlessly at ERs and in long lines at the Interior Ministry, we got used to waiting for months for a driving test. Detachment is the price of 10 years on the job (of prime minister)," he accused.

Opposition leader MK Tzipi Livni joined the chorus of condemnation, saying that "There's nothing new in the government of capitulation. Netanyahu is not protecting the Shabbat, but himself. When it comes to a choice between the public and political survival, Netanyahu chooses personal survival at the expense of the general public."

Yesh Atid Chairman MK Yair Lapid also chose to point the finger at Netanyahu. "The Haredim, the true rulers of this government, have ordered Netanyahu to freeze the works on Ayalon Highways. So Netanyahu of course obeyed and froze it, and we will once again be stuck in insane traffic," Lapid charged

Merez leader MK Tamar Zandberg focused on Katz's decision, saying "in a democratic-liberal state in 2018, infrastructure work should be managed in accordance with the needs and in a way that least disrupts the lives of citizens, and not according to dark whims of politicians who serve rabbis rather than the public. Katz's insufferable capitulation to the Haredim proves just how much this government is pulling Israel away from liberal democracy."

The Meretz party got the required number of signatures by MKs to hold a special hiatus discussion at the Knesset on the matter.

But criticism also came from the coalition. Yisrael Beytenu MK Oded Forer called on the prime minister "to stop this madness."

He called on Katz to "take back the capitulation to Haredi coercion and allow these vital works to be carried out with minimum disruption to the lives of the rest of the public, as was initially planned."

Yisrael Beytenu MK Robert Ilatov added that "the Likud Party is already deep into the primaries, and their considerations are not necessarily what is best for the public. It's not clear why the transportation minister, Yisrael Katz, capitulates time and again to the diktats of the Haredi parties, and damn the secular public that has been working hard from morning to night and will suffer greatly as a result of the works during the week and not on Shabbat."