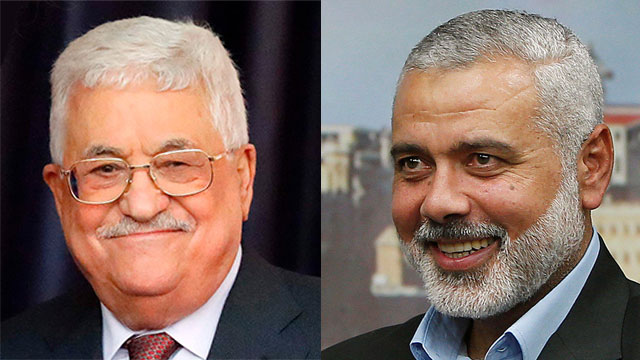 Shortly after Defense Minister Lieberman tells south community leaders he does not believe in an agreement with the terror group as long as it remains committed to Israel's destruction, Hamas warns Israel of consequences if Mahmoud Abbas fails to lift his own sanctions on Gaza.

The Hamas terror group threatened on Friday that Israel would “pay the price” if sanctions imposed on the Gaza Strip by Palestinian Authority President Mahmoud Abbas continue or worsen.

“Israel is responsible for ending the current situation in coordination with, and encouraged by, him (Abbas),” a Hamas statement said. The ultimatum comes on the heels of expected renewed indirect talks between Israel and Hamas as they work to reach a long-term ceasefire to end months of fighting that has repeatedly brought the two sides to the brink of war.

Palestinian President Abbas and Hamas leader Haniyah (Photo: AFP, Reuters)
The Hamas statement was a further cause for concern that the talks would break down before they started after Defense Minister Avigdor Lieberman said earlier in the day that he does not believe in reaching an agreement with the Gaza-ruling terror group. “I am not involved in the arrangement, I don’t believe in the arrangement and the only arrangement is reality on the ground,” Lieberman said during a visit to Kibbutz Kissufim adjacent to the Gaza Strip where he met with regional leaders.

The comments came ahead of expected weekly demonstrations by the Palestinians in Gaza on Friday afternoon, which have almost invariably descended into violence as rioters throw rocks, launch incendiary balloons and hurl improvised explosives, prompting IDF soldiers to open deadly fire against ringleaders.

“Over the last few days, we have seen that Hamas is in complete control of what goes on here. All the violence has decreased to almost zero,” Lieberman stated.

“Therefore, if there is quiet this Friday, the (Kerem Shalom) border crossing will remain open. If there is no quiet, it will be closed.”