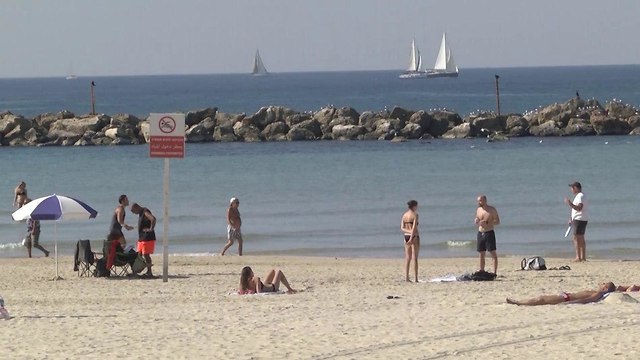 On the backdrop of the #MeToo campaign, women say they don't feel safe when going to the beach alone; Adi, 25, says 'when I get to the beach I rather not be on my own, especially because I’m a woman.'

Despite the success of the #MeToo campaign, which helped raise awareness of sexual harrasment, Israeli women reveal that they do not feel safe at the beach.

“I think twice before I change into a bathing suit at the beach,” said a young woman who was visiting Tel Aviv beach this week, adding that “There is a lot of staring.”

Tel Aviv's beaches (Photo: Lihy Krupnik)
Many women testify that they do not feel safe at the beach, and that they had gotten used to both staring and inappropriate comments. Adi, a 25 year old who visited the Jerusalem Beach in Tel Aviv this week, told Ynet that “when I get to the beach, I rather not be on my own, especially because I’m a woman. The bathing suit makes all the difference in the way people treat you, even though it shouldn’t. Obviously men don’t experience this feeling when they wear a bathing suit.”

Adi: 'Every woman should be able to wear what she wants' (Photo: Lihy Krupnik)
Adi went on to say that “I have many friends that choose to go to the beach with non-revealing clothes, or with a more modest-looking bathing suit to feel more comfortable. It shouldn't be that way! Every woman should wear whatever she wants.” Ofir, Adi’s friend, added, “That’s exactly the feeling. When you wear a bathing suit, you automatically feel exposed—both physically and mentally. It’s not very pleasant.”

Sexual harassment is common at Tel Aviv's beaches (Photo: Lihy Krupnik)
"I think twice before I take my shirt off at the beach. I’ll only do it if I’m with friends, not if I’m alone. There’s a lot of staring and there’s also the chance of someone just deciding to come and sit next to me, and I prefer to avoid that. Actually, the fact that a woman is more exposed seems to give men legitimacy to behave differently,” Ofir lamented.

Some women even said they had to change plans after relentless remarks from men.

“I went swimming and a group of three men approached me. One of them said that his friend wants me to join them, and I said that I’m not interested and swam away from them. Then they followed me and surrounded me. I then got out of the water and had to go somewhere else,” 21-year-old Gili told Ynet.

Gilli: 'I had to leave and go somewhere else' (Photo: Lihy Krupnik)
Gili said she is “not at all surprised by this, which is sad, as it shows how common it is. With time you develop thick skin. I don’t think that things should be like this. But also, I don’t want to stop going to the beach.”

Tel Aviv's beaches (Photo: Lihy Krupnik)
Gilli’s sister, Galin, said that “When I was 17, I took the train home. I was sitting in an empty train car and listening to music. During the ride, a guy came up and sat next to me. He then showed me his phone screen, where he wrote that he wants to have sex with me and would pay me NIS 50,000.”  “I was very young and I froze. I just waited for the first chance I had to get off the train. I’ll never forget it," she explained.

Adar, a 21-year-old man who lives in the Netanya area, feels that staring and inappropriate comments originate in misunderstandings and naivety.

“Most Israeli men were never taught how to approach a girl who they are interested in. So they will give her odd looks and maybe say something embarrassing. They only seek to get the girl’s attention and to get to know her,” Adar argued.

Hadar: 'No one teaches guys how top approach women' (Photo: Lihy Krupnik)
Hillel, who came to the beach with his girlfriend, opined that “There’s a code, and there have to be boundaries. Men and women are attracted to each other and that’s natural, it’s not wrong. Some things are plain and obvious harassment, but some are just natural— a man trying to meet a woman." Shlomo Amiram, 75, has been visiting the beach daily for the past 30 years. He said that men today let themselves go with the way they treat women.

Shlomo Amiram: "It wasn't like this in my days' (Photo: Lihy Krupnik)
“Some men blurt out things, like real indecent proposals, saying ‘do you want to go to a hotel with me?' I do what I can to shut them up and calm them down,” Amiram told Ynet. "In my time, it wasn’t like this at all. We didn’t talk dirty, and there wasn’t such sexual openness. Today’s youth are not what they used to be. I advise men who want to impress a woman to speak respectfully, gently and with honor.”