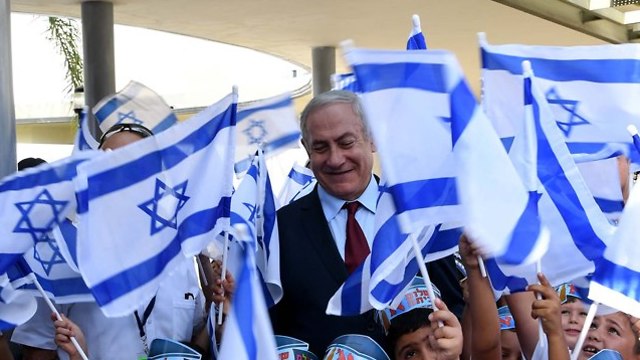 Speaking at ceremony marking beginning of new school year, Netanyahu draws contrast between Israel's absorption of Holocaust survivors and other refugees, along with Israelis evacuated from Gaza in 2005, with UNRWA's perpetuation of Palestinian refugee issue; US ‘is finally beginning to resolve the problem.'

Prime Minister Benjamin Netanyahu welcomed as a “very important thing” on Sunday morning the US’s announcement at the beginning of the weekend to completely halt all funding to the main United Nations organization that provides assistance to Palestinian refugees.

The Trump administration said it would cease to provide any financial aid to the United Nations Relief and Works Agency (UNRWA), which the US and Israel have accused of deliberately bloating the number of bona fide Palestinian refugees.

Speaking at ceremony at the Breuer state religious elementary school in Yad Binyamin to mark the beginning of the new school year, Netanyahu attempted to highlight the contrast between Israel’s handling of Israelis uprooted in the 2005 evacuation of the Gaza Strip, and the refusal of other Arab nations to absorb the 700,000 Palestinians who were either driven out or fled their homes in the fighting during the 1948 War of Independence.

“It started with terrible pain but the State of Israel and all the citizens of Israel worked together so that the people who were uprooted from Gush Katif would not be refugees in their country. We absorbed them and they resumed their lives, their splendid lives. There are memories but there is the present and the future which have already changed, and this gives new life and great hope,” he added.

Noting that he disagreed with former prime minister Ariel Sharon who presided over the evacuation of thousands of Israelis from Gaza, Netanyahu proudly proclaimed that the country “dealt with the problem.”

Moreover, the prime minister also drew attention to the fact that Holocaust survivors were also absorbed into Israel after fleeing communities in which they had lived for generations.

“They were uprooted, survived and came here. Did we leave them as refugees?,” he asked rhetorically.

“No, we absorbed them, from Arab countries as well. They were uprooted, from the same war, the war of liberation. Hundreds of thousands of Jews who came here as refugees without anything; they left all their property behind. We did not leave them as refugees; we turned them into equal citizens, who contribute, in our state,” Netanyahu stated, before contrasting their situation with that of the Palestinians from 1948.

“This is not what is happening with the Palestinians. There they created a unique institution, 70 years ago, not to absorb the refugees but to perpetuate them,” he said, praising the US decision on UNRWA.

“Therefore the US has done a very important thing by halting the financing for the refugee perpetuation agency known as UNRWA. It is finally beginning to resolve the problem. The funds must be taken and used to genuinely help rehabilitate the refugees, the true number of which is much smaller than the number reported by UNRWA. This is a welcome and important change and we support it," he declared.

UNRWA has become the subject of significant scrutiny since President Donald Trump entered the White House.

After appointing his son-in-law Jared Kushner as a Mideast advisor and charging him with formulating a long-awaited peace initiative to put an end to the decades-long Palestinian-Israeli conflict, the UN refugee organization appeared to occupy a significant spot on his radar.

In an internal email recently published by Foreign Policy magazine, Kushner called for a "sincere effort to disrupt UNRWA."

The agency was founded in 1949 after the first Arab-Israel war—the War of Independence—in the wake of the exodus of around 700,000 Palestinian refugees.