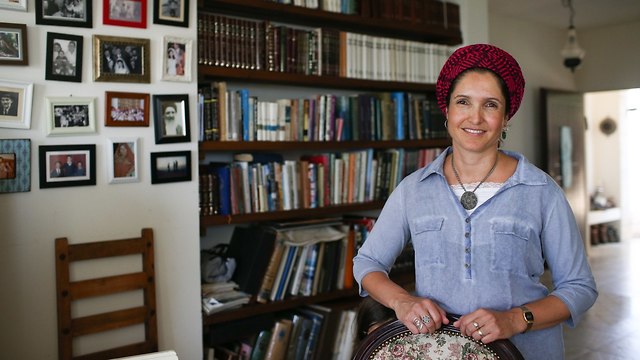 Residents of West Bank settlement breathe a sigh of relief after Jerusalem District Court rules they acted in good faith and with state approval upon settling the land, as directed by Barak government; Attorney for Palestinian landowners: 'We will appeal, expect dramatic implications for most settlements, confident ruling will be overturned.'

Residents of Mitzpe Kramim, located on the eastern slopes of the West Bank, accepted with satisfaction the precedent-setting ruling of the Jerusalem District Court, which ruled that the settlement’s status built on Palestinian land should be regulated.

Shiri Gur Aryeh, one of the founders of the settlement, described the celebrations upon hearing the news Wednesday morning: "One of the residents spontaneously ran to buy meat, there was a barbecue and music in the streets, and a feeling of great fun and joy."

Gur Aryeh (Photo: Ohad Zwigenberg)
Gur Aryeh, a mother of seven, added: "Over the years, they were very disturbed by the uncertainty hanging over their heads. When they evacuated Amona and Migron, the children aged 4 to 20 asked, 'What will happen if they evacuate us? Where will we go? And thank God now we breathe a sigh of relief." In the ruling, handed down Tuesday, the justices ruled that the residents settled on the land in good faith and with the approval of the state, and therefore they should not be evacuated, but rather the landowners should be compensated and the settlement’s status regulated.

Gur Aryeh told reporters about the early days of the settlement about 19 years ago: "We came to an empty but charming hilltop, and gradually more families joined and we grew. At first we settled at another point, and at the instruction of Ehud Barak's government we moved to the point where we are today, where we were told it was legal to settle. Therefore we were quite surprised when a petition was filed against us at the High Court and when we heard that the land was problematic.”

Doron Leshem, a resident of Mitzpe Kramim for nearly a decade and a spokesman for the community, said: "For seven and a half years we have been fighting in court and crying out that to this day we have felt that no one is listening to us. “In 2000, Ehud Barak's government signed an agreement with the residents of Mitzpe Kramim to quietly move the settlement to its present location and after a little more than a decade when we started building houses, a petition was filed with the High Court of Justice and it gives you the feeling that you stole something, it's not a good feeling."

(Photo: Shaul Golan)
He added: "We tried to tell the story and no one listened, and fortunately, the civil procedure in the district court that did a thorough investigation uncovered the truth. “Tuesday’s ruling makes an important statement that not all of those who settle on the hilltops did so on a whim but rather that right and left wing governments sent residents to settle on this land. We hope that the ruling will serve as a precedent for the legal system, the State Attorney's Office and the Attorney General."

Petition to the High Court

In 2011, Palestinians petitioned the High Court of Justice claiming that they were the owners of the land seized by a military requisition order, and that settlement on the land was illegal. Until a decision was reached on the matter the residents were prevented from building on the land.

Gideon Mermelstein and family (Photo: Ohad Zwigenberg)
“We have come here to build, and immediately after we came and there were ready plans on the table, the High Court petition was submitted, and since then all building has been frozen,” said Gideon Mermelstein who moved to the settlement shortly before the petition was submitted. “The dream of building was about to be realized and we experienced disappointment. For the time being we live in a caravan which is not a simple thing but the community gives us strength. Regarding the court’s ruling he said: “It is a great relief to know that the legal system is on our side, even though for years we lived with the feeling that the High Court of Justice was not on our side. We thought that even if the evidence is clear and that if the plaintiffs have no proof of ownership of the land — it does not interest the court, and this is a great relief when there is justice in the court.” Attorney Husam Yunis, an expert on land law and administrative law who submitted the petition to the High Court of Justice on behalf of the Palestinian landowners, told Ynet following the ruling: "This is a decision that contradicts the law that applies in the West Bank to the point that when reading the ruling it seems as if the case is about a mere contract dispute…

"We have already made a final decision to appeal the ruling, which will probably have dramatic implications for most of the settlements in the West Bank, and I believe that the Supreme Court will not hesitate to overturn it immediately,” the attorney said.