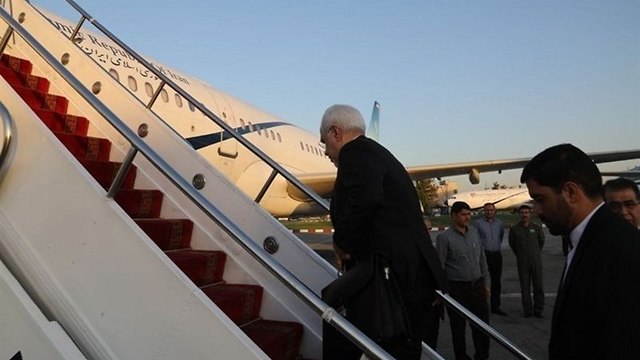 Iranian Foreign Minister Mohammad Javad Zarif traveled to Damascus on Monday for talks with Syrian officials, where he said that all militants must be "cleaned out" of Idlib province in northwestern Syria, according to Fars News.

"All of Syrian territory must be preserved and all the sects and groups should start the round of reconstruction as one collective and the displaced should return to their families. And the remaining terrorists in the remaining parts of Idlib must be cleaned out and the region should be placed back under the control of the Syrian people," Zarif said, according to Fars.

Following the signing, the defense minister said an “axis of resistance is prepared and ready to always respond to any attack against Syria.”

“The presence of the Iranian forces in Syria is in accordance with a request in Damascus, and no other country has the right to express an opinion on this presence,” Hatami said in an interview with the Lebanon-based Al Mayadeen satellite channel.

The defense minister also directly addressed the threat of Israeli attacks against Iran. “According to my knowledge of Iran’s capabilities, in my opinion (Prime Minister Benjamin) Netanyahu’s threats of attacks against Iran are far from reality,” he said.

Iranian President Hassan Rouhani is scheduled to meet Russian President Vladimir Putin and Turkish President Tayyip Erdogan in Iran, Iran's foreign ministry spokesman Bahram Qassemi said Monday, according to Fars News. "I'm optimistic that this meeting will be successful and productive for the region, the people of Syria and the fight against terrorism," Qassemi said. Fars News said the leaders would meet on Friday. The meeting comes as Syrian government forces are preparing a phased offensive in the northwestern province of Idlib and surrounding areas, the last big rebel enclave.

Zarif and Assad (Photo: EPA)
"One of the complicated issues today is Idlib which is the last stronghold of anti-government insurgents. The government of Syria is determined to put an end to this catastrophe, Qassemi said, according to Fars News.