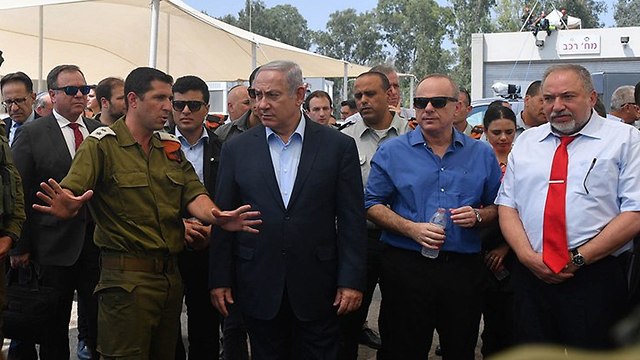 Do Israeli politicians care about Israel?

Op-ed: John McCain's request that President Trump not be invited to his funeral was born out of the belief that he doesn't care about the US and its values. Recent events that have taken place in Israel, such as the attack on 3 Arabs in Haifa, which was met with almost complete silence from Israeli officials, and Katz’s halting of Ayalon Highway bridge construction, makes one wonder whether our leaders care about us.

The Christians part from their dead slowly, arranging ceremonies that could last for up to a week. Senator John McCain's departure, who died of cancer at the age of 81, spread from coast to coast, from Arizona—a state he represented in the Senate, to Washington DC and Annapolis—a beautiful town where the Naval Officers School is located.

The ceremonies were broadcast live on all news channels. They were managed with reverence, combined with religious rituals and military traditions, as befits a president or a king. What he did not manage to achieve alive, McCain did so after his death.

McCain made it clear beforehand that he did not want President Trump to attend the funeral. On the other hand, he made sure that two former presidents, George W. Bush and Barack Obama—who were at one point McCain’s bitter rivals and defeated him in the race for presidency—would be the main figures at his funeral.

The message was sharp and blunt: From the casket wrapped in the American flag, McCain made it clear that Trump was not a legitimate president. He is not part of American democracy or patriotism.

Although Trump was absent, his presence was felt throughout the cathedral the whole time, like Voldemort—a character in the Harry Potter books whose name characters are forbidden from mentioning. There was also a realization that America, where McCain believed and served most of his adult life, was gone.

Obama and Bush did not ignore the disagreements they had with McCain. It was the more impressive side of their speeches. They did not attribute to themselves the achievements of the deceased, his views and his character. They did not aspire to broadcast a false sense of unity.

They praised what they found commendable—his honesty, decency, his courage in battle and during captivity, his political life, his adherence to American values, loyalty to himself and others, the ability to overcome cross-party rivalry in order to benefit state interests. Unlike Trump, of course.

"So much in our politics, in the public discourse, seems petty and evil, insulting, with fake disagreements and staged anger," Obama lamented. "It’s politics that pretends to be brave but in fact was born out of fear."

Bush and Obama spoke nostalgically about a culture in which political rivalry did not engender delegitimization of the adversary. One can insist on an opinion without referring to someone who thinks otherwise—a member of an ethnic minority or another religion or political bloc—as a traitor to the state.

The democratic rules of the game are under attack all over the West because Trumpism is contagious. Unfortunately, Israel is no exception to this story. As I listened to eulogies about McCain, I remembered the attack on three young men from Shfar'am, one of which is a doctor, on the Kiryat Haim beach.

Government ministers did not condemn the attack and did not express outrage. Prime Minister Netanyahu rightly condemned the burning of the Aryeh Deri picture during a demonstration against African asylum seekers, yet he has nothing to say about the incident in Haifa. Some of his voters would not appreciate it.

I recall the argument that the Nation-State Law supporters put forward to its critics—Israel has full civil equality and the law concerns only issues on a national level. It turns out that there is no dividing line. Those who deserve humiliation and hatred on the national level, in a Basic Law, are being brutally beaten as civilians.

The Israelis are not stupid and they understand the message. Elor Azaria also understands. He went to jail as a protege of Netanyahu and Lieberman, and was reinstated, in civilian life, as the trustee of Meir Kahane's vision.

McCain ordered Trump to stay away from his funeral because he believed that Trump cares only about Trump and not about America. I ask myself how much Israel interests our ministers. What went through Netanyahu's mind when he ordered to enrich his friend Shaul Elovitch at the expense of the Israeli public.

What went through the head of Transportation Minister Yisrael Katz when he sabotaged a construction of the bridge on the Ayalon Highway? What happened in the head of Education Minister Bennett when he inaugurated the so called Faculty of Medicine in a so called University of Ariel?

What was the Agriculture Minister Uri Ariel thinking when he invested his funds in ultra-Orthodox nuclei in Tel Aviv? More and more. Israel is not on their minds. They ought to count themselves lucky that in Israel no one of McCain’s stature has died.