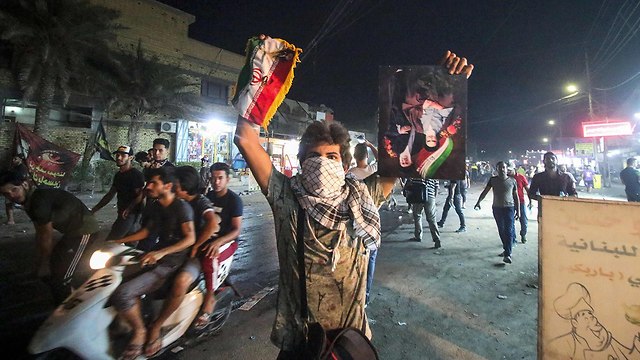 Angry protesters storm the Iranian consulate in southern Iraq, setting a fire inside amid a wave of demonstrations that have turned deadly in the past few days; demonstrators held two Iraqi employees hostage at a nearby oilfield; 12 protesters have died in clashes with security forces since Monday.

Demonstrators stormed the Iranian consulate in Iraq on Friday, in protest of corruption and misrule by Iraq's political elite. The angry protesters damaged the consulate's offices and shouted anti-Iranian slogans while others briefly took workers hostage at a nearby oilfield.

After five days of deadly demonstrations in the southern city of Basra, in which government buildings have been ransacked and set alight, protesters broke in and damaged the consulate's offices, shouting condemnation of what many perceive as Iran's sway over Iraq's political affairs.

Demonstrators storm the Iranian consulate in Iraq (Photo: AFP)
The protesters shouted anti-Iranian slogans outside the Iranian consulate, including "Iran, out, out!" before they stormed it and set a fire inside. Smoke could be seen rising from the building. Protesters also burned an Iranian flag. Security sources said the consulate was empty when the crowd burst in. Iraq's Foreign Ministry said the storming of the consulate, which it deeply regretted, had nothing to do with protesters' demands.

"The targeting of diplomatic missions is unacceptable and detrimental to the interests of Iraq," said ministry spokesman Ahmed Mahjoub.

Iran, however, blamed Iraq for failing to protect its embassy and said it expected Baghdad to "identify and punish the attackers quickly," Bahram Qassemi, the spokesman for the ministry, told journalists, according to state media.

The Iraqi ambassador to Tehran was later summoned to the foreign ministry over the complaints.

Several foreign governments have consulates in the city, including the United States and Russia. In a statement, the US State Department condemned the violence against diplomats and called on "all parties, including security forces and protesters, to uphold the right of peaceful protest and to protect diplomats and their facilities."

Late in the day some 65 kilometers north-west of Iraq's second biggest city, another group of protesters entered a water treatment facility linked to the West Qurna 2 oilfield, managed by Russia's Lukoil.

The protesters held two Iraqi employees hostage for about an hour before leaving the facility peacefully, according to a Lukoil source and a source with Basra's energy police. Production was not disrupted, a manager at the oilfield said.

The unrest in Basra could have deeper implications for a country that imports most of its food.

Since Thursday, protesters have shut Iraq's only major sea port at Umm Qasr, 60 km (40 miles) south of Basra. It remained shut on Friday, local officials and security sources said, although oil exports, carried out from offshore platforms, have not been affected.

Residents say they have been driven to the streets by corruption that allowed infrastructure to collapse, leaving no power or safe drinking water in the heat of summer, with protests intensifying on Monday.

Since then at least 12 demonstrators have died in the city of 2 million, mostly in clashes with security forces, as demonstrators torched government buildings and the offices of political parties, whose leaders are all vying to form Iraq's ruling coalition.

The national security council of the Prime Minister of Iraq, Haider al-Abadi, met on Friday and said it was investigating casualties at the protests.

The storming of the consulate came hours after Iraq's most revered Shi'ite cleric called for a political shakeup in Baghdad and a halt to violence against the protesters.

Ayatollah Ali Sistani, the ultimate authority for devout members of Iraq's Shi'ite majority who normally holds himself above day-to-day politics, placed blame for the unrest with political leaders and said a new government should be formed, "different from its predecessors."

Smaller protests also took place on Friday in other cities in Iraq, including Karbala and Baghdad.

The unrest has thrust Iraq into a major new crisis at a time when politicians have yet to agree on a new government after an inconclusive election in May. The new parliament finally met on Monday for the first time, but broke up after a day having failed to elect a speaker, much less name the next prime minister.

Parliament's interim leader summoned lawmakers to an emergency session on Saturday to discuss the unrest.

Leading political figures, embroiled in government formation negotiations in Baghdad, have scrambled to respond to the crisis, condemning rivals for inaction.

Iraq's political factions mainly came together in the past four years during a war against Islamic State. Baghdad's two most influential allies, Washington and Tehran, also backed the government despite their deep hostility to each other.

But since Islamic State was largely defeated last year, divisions have resurfaced. Shi'ites in the south, where most of Iraq's oil wealth is produced, say Baghdad politicians have squandered state funds while leaving them desperate.

Sadr, the former leader of an anti-American Shi'ite sectarian militia who has reinvented himself as an anti-corruption campaigner, has allied himself with prime minister Abadi.

Their alliance is competing to form a government against a rival bloc backed by Abadi's predecessor Nuri al-Maliki and the leader of an Iran-backed Shi'ite armed group, Hadi al-Amiri. Amiri called on Abadi to resign over the crisis on Friday.