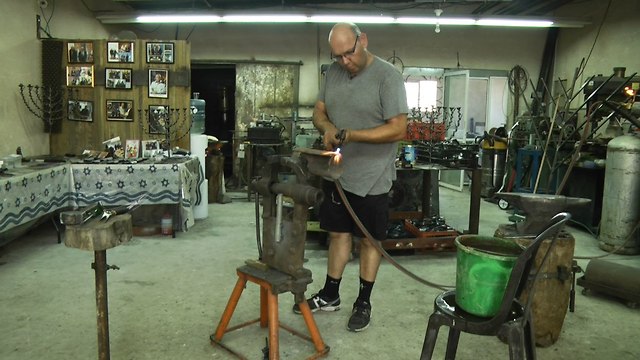 After Yaron Bob's home sustained a direct hit by a Hamas missile, he decided to create symbols of peace out of remains of rockets as a way to overcome trauma; Shimon Peres, Hillary Clinton and Tony Blair are among those who became recipients of artist's unique creations.

Yaron Bob, a sculptor from the Gaza border community decided to turn a barrage of Qassam rockets that land in the area into an art project turning the Hamas missiles into flowers and symbols of peace.

Bob started the project 12 years ago after his home sustained a direct hit by a Hamas rocket.

“I looked at the rocket and the rocket looked at me, as if it was mocking me, and it made me so mad that I said to myself ‘I have to erase the smile from its face, stop being afraid,’ as I started to cut rings out of it,” Yaron described.

Bob discovered sculpting by accident by stepping on a fork and seeing it bend. It became a way for him to cope with his attention deficit disorder.

He suggested to the principle of a school where he taught computer classes that opening a sculpture workshop would help students who also suffer from disorders related to attention deficit.

During one of his blacksmithing classes, a rocket alert siren was sounded, and a few seconds an explosion occured only ten meters away, which resulted not only in complete chaos in his blacksmith’s shot but also in a psychological trauma, which Yaron suffers from to this day.

Following the explosion, Bob returned to his workplace in order to clean it and in that moment he decided to turn tragedy into art as he started to cut the remains of the rocket into rings in order to make a sculpture.

The flowers he made from the rocket that hit workshop he gave to the families and the mayor of the city of Sderot—who recognized Bob’s potential and urged his to continue his work.

"They were thrilled and amazed by the gesture," Bob exclaimed.

The only rockets from which Bob refuses to make sculptures are those that cause physical damage to people, since he believes such sculptures would carry negative energy with them.

"The flowers I sculpt do not wither like a desire of the people of Israel for peace," he concluded.