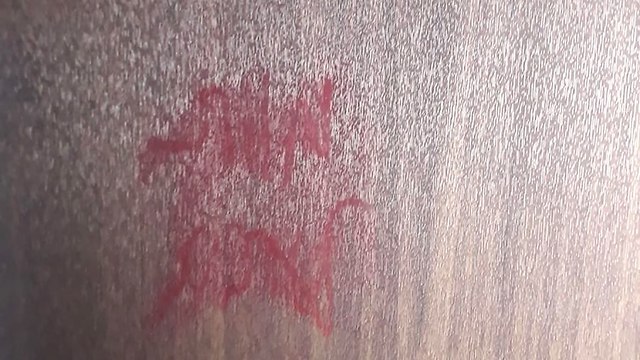 Former IDF soldier who fought in Operation Protective Edge and served in the Givati Brigade for three years says he has never encountered any racism before returning to his family home in Giv'at ha-Moreh in northern Israeli city where he discovered 'death to Arabs' written on his front door.

Racist graffiti was discovered on the door of a home of a former IDF Arab-Israeli soldier in the northern city of Afula overnight Saturday, calling for “death to Arabs.” The 25-year-old soldier, identified as “S”, served in the Givati Brigade for three years in some of the most difficult areas and participated in Operation Protective Edge in 2014. S., who recently moved to Giv'at ha-Moreh in Afula, described the moment when he discovered the racist graffiti. “I returned home at about 11pm and discovered the writing on the house door,” he said.

'Death to Arabs' sprayed in Hebrew (Photo: Courtesy)
“They drew in red paint on the door. It’s the last thing I thought would happen to me. I never thought it could happen,” he added. S. was born and raised in a village in the Galilee and at age 18 decided to draft into the IDF. After being discharged from the military, he worked as a security guard and five months ago moved to Afula with his wife and children. According to S., he has never experienced any form of racism until discovering the graffiti on his door. “It was like a blackout. It is disgusting and shameful. It is either a price tag attack or children,” he said, vowing that the incident would have no significant impact on his opinions. “This act will not make me change my opinions. I am not scared and I will continue to live in Afula without a second thought,” S., added. “I have never harmed anyone and no one will harm me. A person who served in the IDF for three years and fought in Protective Edge will not waste time on anyone carrying out a price tag.” Police said that an investigation had been launched into the incident.