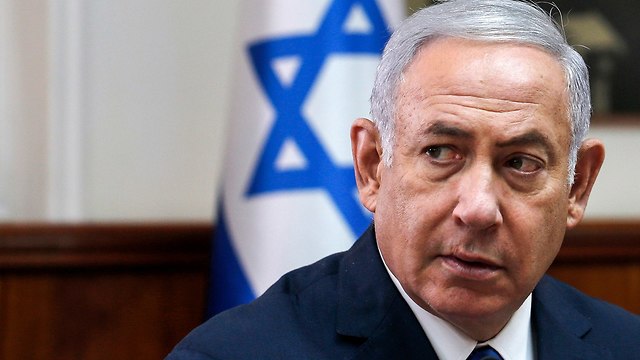 Netanyahu praises US decision to shut Palestinian office in Washington

During weekly Cabinet remarks, Netanyahu laments Palestinian refusal to enter into peace negotiations with Israel, while slamming them for attacking the country 'with false claims in international forums'; PM scathes Europe's 'unacceptable' 'appeasing' of Iran.

Prime Minister Benjamin Netanyahu praised on Wednesday the US decision taken earlier this week to close down the Palestinian diplomatic mission in Washington in reaction to the Palestinian refusal to enter into peace negotiations with Israel.

"The US made the correct decision when it decided to close the PLO (Palestine Liberation Organization) offices in Washington. The Palestinians refuse to enter negotiations with Israel even as they attack Israel with false claims in international forums,” Netanyahu said at the opening of the weekly Cabinet meeting.

The State Department said the US step came after a review of the office of the Palestine Liberation Organization centered on the fact that no "direct and meaningful negotiations with Israel" are underway despite previous warnings.

“Israel very much appreciates the Trump administration’s decision and supports American actions that are designed to make it clear to the Palestinians that the refusal to enter into negotiations with Israel and the unbridled attacks against Israel will not only not advance peace but will certainly not make things better for the Palestinians,” the prime minister said, full heartedly rallying his government once again behind President Trump.

Netanyahu used his remarks remember the New York 9/11 attacks on the World Trade Center in 2011, while noting the role in international terror by Iran.

“Yesterday we marked 17 years since the awful terrorist attack against the American people at the Twin Towers in New York and at the Pentagon in (Greater) Washington,” Netanyahu said.

“This operation was carried out by Al-Qaeda, Al-Qaeda has passed the torch to Daesh (ISIS), even as Iran also promotes international terrorism.”

The world, Netanyahu continued, is facing a two-pronged challenge stemming from radical Islam—radical Shi’ites on the one hand led by Iran, and radical Sunnis led by ISIS.

Netanyahu called on the world to unite against terror organizations. While praising the world for forging an alliance against ISIS, the prime minister lamented what he described as an appeasement of Iran by foreign leaders.

“On the contrary, what we are seeing is that while Iran is sending terrorist cells to Europe, European leaders are appeasing—and reconciling with—Iran, in the same week that the terrorist cells were due to carry out their operations, which we helped thwart. This is unacceptable,” he bemoaned.

“The appeasement of Iran abets the relentless assault on the values and security of the free societies, and the time has come for Western governments to join the strong and clear effort by the Trump administration against the terror regime in Tehran," he concluded.