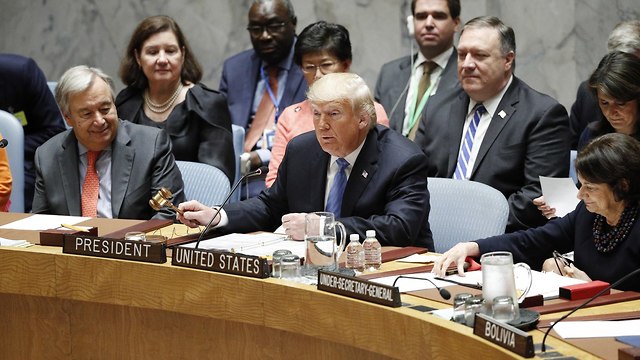 Trump: US to pursue additional sanctions against Iran

At a UN Security Council meeting, the US president said Washington would make sure that Iran, the 'world's leading sponsor of terror', which fuels 'conflict around the region and far beyond,' will never be able to acquire nuclear weapons; warned that sanctions against Iran would be 'tougher than ever before.'

US President Donald Trump issued a strong warning to Iran on Wednesday saying that the US administration will impose "tougher than ever" sanctions against the nuclear-aspirant country.

A day after he accused leaders in Tehran of sowing "chaos, death and destruction", the US president continued his tirade against the Islamic Republic while chairing a United Nations (UN) Security Council meeting on nuclear proliferation.

US President Donald Trump chairing a United Nations (UN) Security Council meeting (Photo: EPA)
At the start of the meeting, Trump justified his decision to withdraw from the nuclear agreement with Iran in light of its "malign conduct."

The US president used the opportunity to issue a strong warning to nuclear-aspirant Iran, which he deemed the "world's leading sponsor of terror" fueling "conflict around the region and far beyond."

Trump promised that the United States would ensure that Iran could never obtain nuclear weapons.

"I ask all members of the Security Council to work with the United States to ensure the Iranian regime changes its behavior and never acquires a nuclear bomb," he said. "The United States will pursue additional sanctions tougher than ever before to counter the full range of Iran’s malign conduct,” Trump told the council, adding that countries who fails to comply with the sanctions against Iran will face “severe consequences."

The US and the European powers disagree on the sanctions against Iran, since Britain, France and Germany still uphold the Iran nuclear deal.

These countries oppose the imposition of sanctions against Iran since they believe Iran is in compliance with the terms of the long-term 2015 nuclear deal.

On Monday, five world powers and Iran agreed to establish a financial facility in the European Union (EU) to facilitate payments for Iranian imports and exports including oil, a key move sought by Tehran following the US pullout from the nuclear deal and its re-imposition of sanctions.

"We need to build a long-term strategy to manage the Iran issue, not just sanctions and containment," French President Emmanuel Macron said Wednesday, adding that sanctions are not enough.

In addition, British Prime Minister Theresa May said the nuclear deal remained “the best means of preventing Iran from developing a nuclear weapon.”

In his speech, the US president also addressed the situation in Syria.

Trump said that the Syrian president's slaughter of his country was made possible by his allies, Russia and Iran. However, he thanked Syria's allies for to postponing their attack on Idlib, the last stronghold of rebels in Syria. “With all of this said, I want to thank Iran, Russia, and Syria for, at my very strong urging and request, substantially slowing down their attack on Idlib province and the 3 million people who live there, in order to get 35,000 targeted terrorists… Get the terrorists, but I hope the restraint continues. The world is watching," Trump concluded.

Trump also criticized Iran on Tuesday during his speech at the United Nations General Assembly.

UN General Assembly (Photo: AFP)
According to the US president, the leaders in Tehran are sowing "chaos, death and destruction", and the country's "corrupt dictatorship" is plundering the Iranian people to pay for aggression abroad.

Some delegates at the General Assembly laughed and muttered when Trump praised the “extraordinary” achievements of his administration.

“You saw and heard their laughter. The message of this ridicule was the crumbling of your facade and the increased isolation of America, and this was a big political disgrace," said Mohammad Ali Jafari, Major General of the Islamic Revolutionary Guard Corps (IRGC). “You can be sure that the people of Iran and the region are laughing at your completely false and ridiculous claims, but you can’t hear their laughter from far away," Jafari added.

Regardless of Iran, Trump's speech Tuesday was unusual. The American president lashed out at The Hague Court, the Human Rights Council, the immigration agreements, and globalization.

Trump called upon the countries of the world to reject others countries' attempts to determine their fate, and promote patriotism instead.

“America is governed by Americans. We reject the ideology of globalism and accept the ideology of patriotism,” Trump told the audience. Trump's critics said Trump's speech undermines the concept of international cooperation, the same idea that led to the establishment of the UN following the horrors of World War II. On the other hand, Trump's supporters claim that the American president showed courage by forcing world leaders to see reality as it is. Before chairing the Security Council meeting, Trump met with Prime Minister Benjamin Netanyahu. Contrary to what he said in the past, the American president said that he "likes a two-state solution."

"That's what I think works best. That's my feeling. Now, you may have a different feeling. I don't think so. But I think two-state solution works best," Trump said as he posed for photographs with Netanyahu.

Trump gave his endorsement of the two-state solution moments after Netanyahu praised the American-Israeli alliance as never being stronger “under (his) leadership.”

Later, Trump told a news conference that reaching a two-state solution is "more difficult since it's a real estate deal."

The US president then revealed his plan to present a peace plan in the next two to three months.

Asked what Israel might have to give up in return for the embassy's move to Jerusalem, Trump replied: "I took probably the biggest chip off the table and so obviously we have to make a fair deal, we have to do something. Deals have to be good for both parties ... Israel got the first chip and it's a big one."