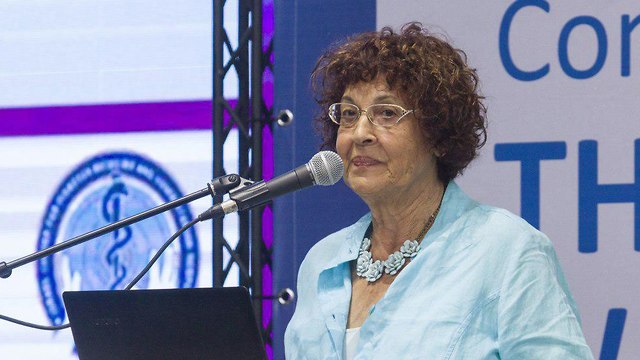 Speaking at the International Multidisciplinary Conference on the Treatment of War Injuries, Nadia Cohen asks Syria's president to forgive and allow husband's body to be buried in Israel.

Nadia Cohen, the widow of Israeli spy Eli Cohen who was caught and hanged in Syria in 1965, urged the embattled country's president Bashar Assad on Wednesday to release her husband's remains for burial in Israel.

Speaking at the International Multidisciplinary Conference on the Treatment of War Injuries at the Galilee Medical Center in Nahariya, Cohen addressed Assad, saying, "I implore you, even beg of you, to release Eli's remains. I'm 83 years old, look at us and forgive."

Nadia Cohen (Photo: Ido Erez)
"I thank those who came up with the idea that I speak to Assad's heart. I sent him letters 18 years ago as well as photos of our children, and grandchildren to soften his heart and release Eli's body," the Israel spy's widow recalled. "I rejoiced when he wrote back: 'in due time.' Those words consoled me," she explained. "Meanwhile, time has passed and Assad has been going through a tough patch—a revolution has occurred in his country," Cohen stated. "President Assad, your people has paid a high price, the people you care about. I turn to you with love and wish for peace," Eli Cohen's widow said. "Eli was an angel who (came into this world) to fulfill a certain role, to protect his country and his people.

"He adored Israel and the piece of land we had received. He was a Zionist who contributed and helped (the State of Israel) and left behind three children that don't even know him," she lamented.

Eli Cohen, left, during his trial in Damascus (Photo: AFP)
The conference was organized after more than 6,000 victims of Syria's seven-year civil war had received medical attention in Israel, with half of them being treated at the Galilee Medical Center.

A multidisciplinary face reconstruction surgery of a Syrian refugee who endured a severe head injury was the highlight treatment and first of its kind given in Israel.

When Cohen concluded her speech, the Director of hospital Dr. Masad Barhoum, called on the audience to applaud her. Barhoum said he sympathizes with Cohen's plea and turned to Assad in Arabic, describing the treatment Israel gave the Syrian refugees as the biggest humanitarian operation in its history. The director mentioned that treating the Syrians challenged the medical staff's abilities and raised many ethical questions.

The IDF Medical Corps will present during the conference the field hospital that was acknowledged by the World Health Organization as the most advanced in the world.